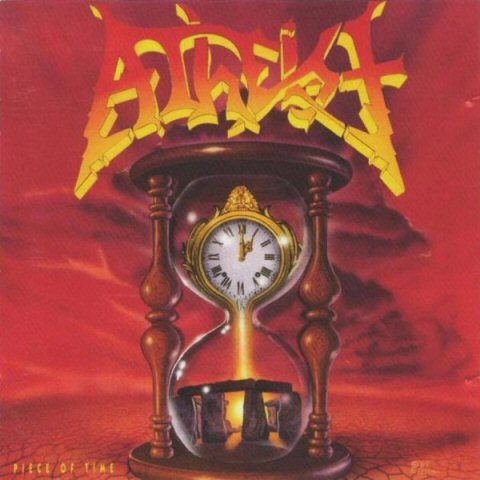 Recorded in 1988, Atheist’s first album, Piece of Time, had a huge impact on the death metal scene, which, at the time, could be said to be enjoying its peak years. A death album as conceived from a jazz-rock aesthetic, its unpredictably shifting tempos, non-linear riffing progressions, and sheer technicality did as much as any release of the era to push the genre’s boundaries, breaking through preconceived limitations and preempting similarly adventurous contemporaries like Cynic, Pestilence, and Death (who had yet to become at all seriously progressive). One listen to brain-twisting creations like “Mother Man,” “Room with a View,” “On They Slay,” and “I Deny” — meshing frantic, severely discordant chords and sparse melodies with the agonized growls of frontman Kelly Shaefer — and realizing they still stand up to scrutiny following the many repeat listens necessary to absorb them, is enough to prove this assertion. The title track is another fine example, as it threads a dizzying path through sudden stops, starts, and turnarounds before finally unleashing a small taste of straight-ahead, 4/4-time thrashing at its conclusion. Also worth pointing out is that most of these tracks were initially composed by the Roger Patterson/Steve Flynn rhythm section, with guitarists Shaefer and Randy Burkey only subsequently adding their riffs to the insanity, marking a rare example of metal not based entirely on guitars. Even more impressive, though it was a remarkable achievement in its time, Piece of Time only hinted at the technical daring and unorthodox sophistication to be achieved by Atheist’s second full platter, the watershed Unquestionable Presence.