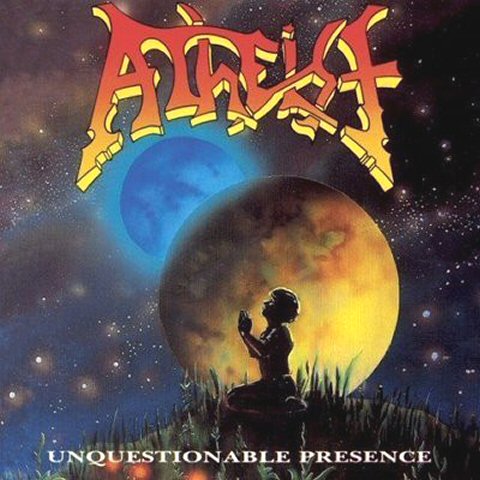 Despite the very positive reception that had greeted their bold first album, Atheist almost didn’t last long enough to finish their second. Taking a break from recording to embark on a short tour, the band suffered a terrible blow when founding bassist Roger Patterson was killed in a horrifying Louisiana highway van crash. Shattered, but determined to finish their friend’s last project at all costs, the remaining members drafted session bassist Tony Choy in order to get the job done, emerging with a landmark recording in the process. Indeed, whereas 1989’s Piece of Time had been a shock, 1991’s Unquestionable Presence was a revelation. With their sparing but highly effective use of melody (mostly nuances and accents during solos and choruses), challenging songs like “Unquestionable Presence,” “Your Life’s Retribution,” and “Enthralled in Essence” advanced Atheist’s uncompromisingly dense “death-jazz” to previously unscaled heights. Throughout the album, dissonant, lightning-speed guitar riffs, slap bass, and screwy time signatures collide to create a recipe at once more intricate and more approachable than its predecessor — all the while keeping song lengths to manageable three to four minutes for maximum, concentrated impact. Matching the band’s evident musical growth, vocalist Kelly Shaefer also stepped it up on the lyrical front, issuing inscrutably enigmatic, eyebrow-raising lines on par with the album’s nearly impenetrable sonics. A daunting album to decipher, Unquestionable Presence is just as rewarding once decoded, and is still considered by experts to be one of the Floridian death metal scene’s ultimate statements in progressive metal.