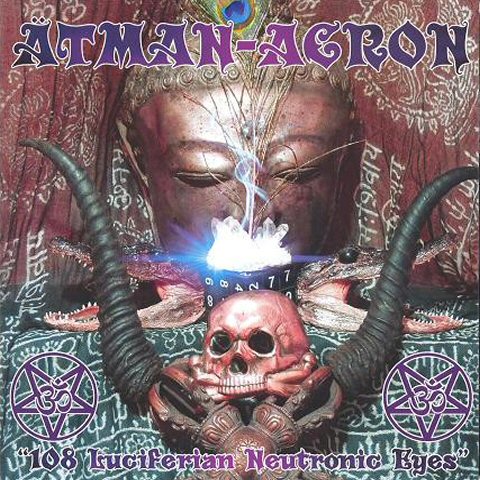 Sure at first, you might think you’ll find round the cradle of two lengthy tracks (respectively almost nine and ten minutes long, no less) the usual suspects, such as Black Sabbath, Trouble or Saint Vitus. Expect that as the puzzling title (‘108 Luciferian Neutronic Eyes’) or the psychedelic yet disturbing artwork strongly suggest, there far more than meets the eye (and ear) on this spellbinding debut recording. And indeed, as soon as the needle goes down and the first sound you hear is a of hypnotic eastern sitar soon drowned in a sudden and massive distortion burst. This track really builds on a repetitive guitar riff but then gets totally psyched out big time but still stays heavy. For the next twenty minutes Ätman-Acron takes you to a whole new doom dimension, leaving you breathless in a bizarre, altered state yet begging for more. So just relax and let thy doom take you higher. This EP was a very powerful and promising debut but the band disbanded in March of 2012 and evolved into Aeonsgate. Asking one of the band members about how Aeonsgate differ to Ätman-Acron musically and conceptually? Ätman Acron was more Electric Wizard 70’s influenced, where Aeonsgate is more in an epic doom vein, more like Great Coven (another one of my previous bands) but more mature and progressive.

Track list:
1. Apprentice Of The Black Wizard
2. Emperors Of The Immortal Soul