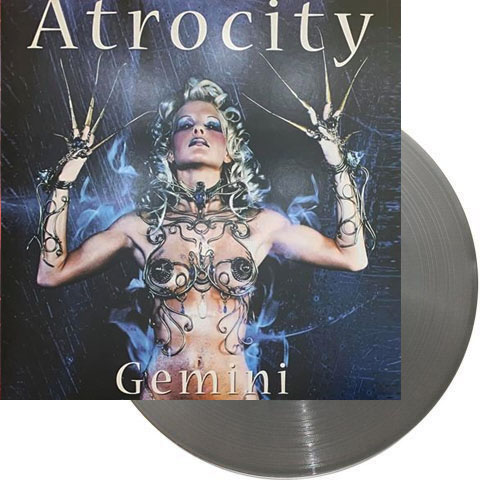 It was bound to happen. At this time of their career Atrocity were driving themselves further away from death metal towards goth and industrial. Their little experimentation in the sounds of the ‘80s on Werk 80 has affected the way they write music in the new millenium. For better or worse? Well taking into consideration their first four brilliant albums, the new style is for the worse. First of all, make no mistake: although this is no longer death metal, that metallic element remains, the guitars being as heavy and abrasive as they’ve ever been. Perhaps the worst thing to happen to Atrocity was Rammstein’s movement to the public forefront of the industrial-metal scene. While neither band were the progenitors of the genre, they both made it a much more visible force by driving a stronger metal sound into the groundwork that had been laid out by bands such as Ministry and Front 242. Gemini is another entry in the book of hybrid music and the overall song structures are much more straightforward and simple. Vocally, Alexander Krull has expanded his range and sounds fully comfortable and confident with his cleaner singing style. The songs on Gemini are much more accessible than normal Atrocity songs, and if you didn’t know better, you could call this album Werk 81. Because for the most part, the songs sound like old ‘80s songs redone with heavy guitars. Actually, there are a few cover tunes on Gemini, which is totally pointless considering they just released a whole album’s worth three years earlier. You should also be aware that there are two different versions of this album, the red and the blue artwork. The red version contains the English version of the last track Lili Marleen, while the blue version contains the German version of the song.