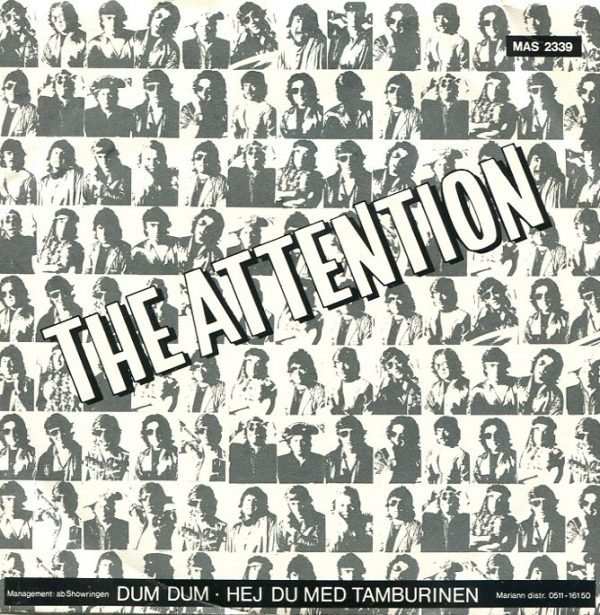 Swedish, Dalarna based (Enviken/Sågmyra/Borlänge and Falun), rock n roll band The Attention played rock n roll hits from the 60s, both in their original form but also as Swedish versions of some famous hits from the era. The members were Bengt “Benke” Mattsson, Kent, Lasse Andersson, Ingemar and Bosse. This vinyl single was recorded in Skara and produced by none other than Little Gerhard. The single opens with Hej Du Med Tamburinen, which is a Swedish version of Bob Dylans classic, Mr. Tambourine Man. The Swedish version was written by Lalla Hansson. On the B-side we find Dum Dum, which is The Attention’s version of German singer Drafi Deutscher break through track Marble Breaks And Iron Bends. I dont know if this band released anything else. They did a two week record session at the record label Electras Studio Mill in the winter of 1981 where they recorded covers of The Who’s “The Kids Are Alright”, The Beatles “Sgt. Pepper’s Lonely Hearts Club Band” and Bobby Troups “Route 66” (later hits for both Nat King Cole, Chuck Berry and Rolling Stones) but as i said i dont know if there is another release out there or if the recording just ended up on a shelf. The single has the same front and back cover. The group picture seen here is a digital archive photo so you can see what the band looked like at the time. Its not something that will be included if you buy this single.