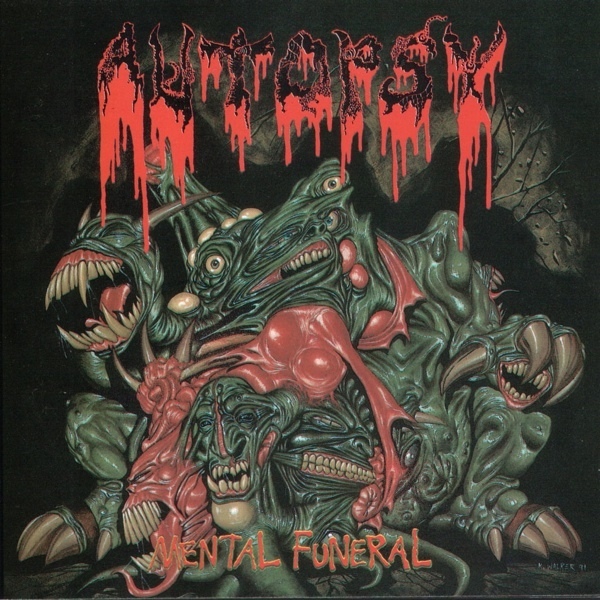 Autopsy were always unique. Even with their influence looming over countless bands (particularly the early swedish scene bands, i.e. Nihilist/Entombed, Grave, Dismember, etc.), they STILL have a sound that can’t be confused with anyone else. You KNOW when you’re listening to an Autopsy album. And the Autopsy sound really came into focus on “Mental Funeral”. While “Severed Survival” is also a classic album, “Mental Funeral” beats it out as Autopsy’s best. It’s one of those rare records, that “works” every time. The collection of songs work as a whole piece and are beyond capable of standing on their own: the opening death gallop of “Twisted Mass Of Burnt Decay”, to the unholy coupling of “Fleshcrawl” and “Torn From The Womb”, the brilliant “Destined To Fester” and everything in between…All the best doomed out death metal riffs in the book combined with well placed bursts of speed. Autopsy’s lack of caring about production value also, gives “Mental Funeral”, as well as their other records, it’s own personality. Their albums sound like they’re decaying as time goes on, each record less polished than the last. The organic sound of “Mental Funeral” adds to its deathly atmosphere, you can almost smell the coffin stench when listening to it. Crude, nihilistic, and brilliant. Autopsy were masters of their (lack of) craft. And “Mental Funeral” was their apex performance.