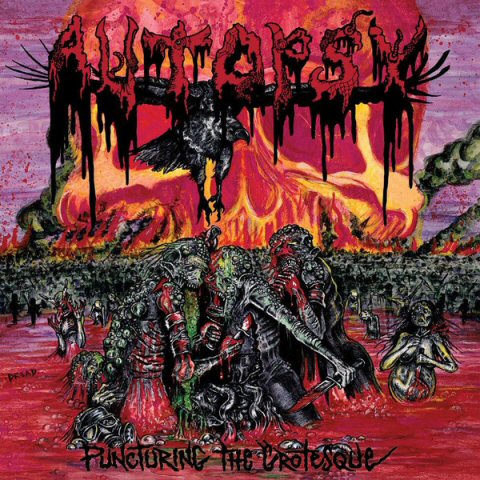 From all-out death metal savagery to crawling, doom-filled sludgery, with Chris Reifert’s distinctive brand of vocal sickness, Autopsy pushes the limits of taste and brutality. One of the early breed of US death metal acts, Autopsy formed in 1987 in San Francisco and 30 years later they comes up with this mini album called, Puncturing The Grotesque, containing 7 tracks of blistering sickness, and their first new material since the pulverising Skull Grinder. Here you have the high-octane version of the none-too-subtly titled ‘Fuck You!!!’, originally known from 80’s West Oakland act Bloodbath (which once featured current guitarist Danny Coralles). Bloodbath US was a large inspiration for Autopsy in their formative years. Of the 30th anniversary of Autopsy, mainman Chris Reifert comments: “30 years of Autopsy…how the hell did that happen? Seems like just yesterday but somehow a million years ago that a couple of degenerate teenagers formed this beast that still lumbers and lurches around the confines of the studio and the expanse of the world itself. It’s hard for us to believe too. Just don’t think we’re letting you out of the audio noose yet….we still have some of our sickest tricks up our sleeves for your horrific pleasure!”