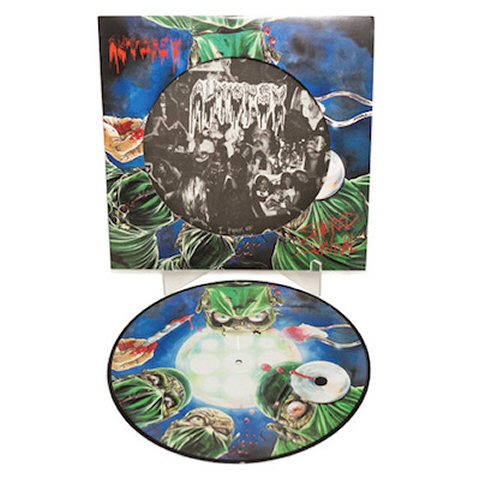 Remember growing up and having the authoritative figures tell you that certain things are ‘bad’ and should be avoided like the plague. However, like mild-allergenic foods, we tend to be drawn towards these things like a slow moving magnet. Pulling us in closer and closer, until these terrible items take a hold of us and pervert our minds (as the parental figures like to make us think). Well, I’m glad Autopsy’s parents weren’t around to make better choices for them. Because then the band itself might of not existed to rightfully stimulate our distasteful ears. The production on this release has a very primitive sound quality. Often filthy in context compared to later 90’s death metal groups. However, all of the instruments are heard equally as loud, including the often excluded bass guitar. Severed Survival has a very analog production as well. Giving it a certain 80’s metal charm. Reverb—you’ll notice it right away—is water logged into every instrument on this album. The effect further adds to their unclean atmosphere. It is like watching an old dubbed 70’s horror movie. Unhindered and unmastered. The dubbing, reverb in this case, almost gives it that real presence. Like watching a second generation tape of The Texas Chainsaw Massacre or Last House on the Left, and having an over-your-shoulder, lurking uneasiness. ‘Hey dude, where did you get this tape…it is so life-like’ ‘I…uh…rented it.’ Musically, Autopsy proved that they weren’t a mere effect. Rather a force, and not easily imitated. They would have overall worthy musical qualities; ranging from a drummer who boldly vocalizes, dual guitarists that pump out primitive and calculated rhythms, also the presence of a bass in the mix. This debut album was so important to the death metal genre and there would be a lot of bands coming up that were heavily influenced by Autopsy. If you are slightly interested in the old school death metal then this is an album to check out