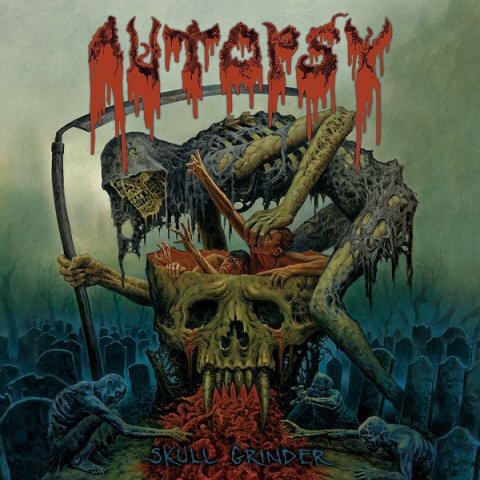 When the first tune from this EP sounds like blistering, vintage Slayer with Chris Reifert vomiting all over it, and coincidentally superior to anything on the latest album by Slayer themselves, then you officially have my attention. And if Skull Grinder has any defining characteristic at all, it’s that it is the most unabashedly primal, old school recording Autopsy have released in this latest era of gruesome productivity since The Tomb Within EP five years earlier. The tracks here cycle pretty evenly between their death and doom halves, fronting the record with churning proto-death ragers Strung Up and Gutted and the title track, and then about half-way through Children of the Filth it slows to a crawl. Sanity Bleeds is interesting because it’s basically an atmospheric doom piece without the drums, so the guitars wail off all over the funereal landscape and some of the vocals take on this heavily sustained, mourning atmosphere, paired up with Chris-snarls. A coupling that provides for the most unique moments of the EP, and signifies a change in tone since the next 13 minutes are all slower in nature and yearn for that same dreary ghoulishness…like chunks of human flesh swaying slowly on meat hooks, measured pendulums of mortality. Which isn’t necessarily a bad thing, since Autopsy are experts at that pace, but it wouldn’t have killed the recording to have a little more speed/death in there for added balance throughout. All in all its very straightforward, carnal and ugly stuff and the instruments sound huge, about to tear themselves from the album onto which they’re captured. Add to that more of Wes Benscoter’s colourful artwork, in line with Macabre Eternal and Tourniquets, Hacksaws and Graves, and you’ve got a record which fits in flush with the band’s yesteryear classics and the incessant meat-train of their recent output. Not their best material by any means, but if you’re reading this you probably already know what to expect, and they do not fuck around with those expectations, but grab them by their throats and drag them all down into their gutter of grime and gore. Consistency with its skin stripped off.

Track listing:
1. Strung Up And Gutted
2. Skull Grinder
3. Children Of The Filth
4. Sanity Bleeds
5. The Withering Death
6. Waiting For The Screams
7. Return To Dead