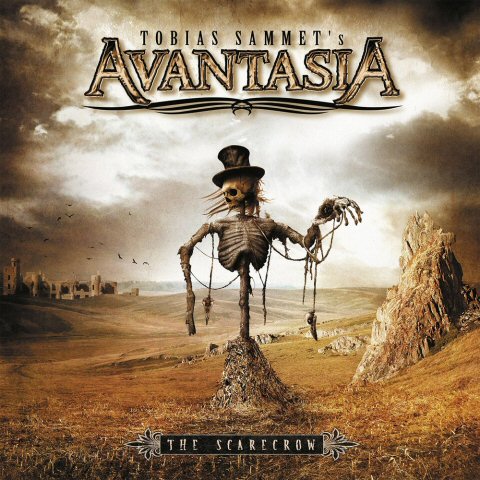 No life was to be found in Tobias Sammet’s Avantasia for years after the release of second the ‘Metal Opera’ back in 2002 until 2007 and the ‘Lost In Space’ single and EPs, which certainly provoked mixed feelings about the new full-length album ‘The Scarecrow’ which finally makes its long-awaited release. As ‘Lost In Space’ may have given away, Avantasia is a different entity than the collection of musicians that brought us the two ‘Metal Opera’ albums. Years have passed and Tobias has matured in his sense of music. ‘The Scarecrow’ is not a typical power metal album laced with wailing singers and double bass fury, the album hits you from a different angle even though the power metal has not completely escaped by any means. The album is more diverse than Avantasia has been before, different elements are played around with and overall ‘The Scarecrow’ is a brave and adventurous effort from one of power metal’s most popular frontmen. Maturity is the theme of the album, although still power metal in its tendencies it has more of a hard rock lean to it as well as more of a commercial and radio-friendly feel. Avantasia is still big with guests, this time featuring such stars as Alice Cooper, Rudolf Schenker, power metal icons Michael Kiske and Kai Hansen as well as bluesy idol Jorn Lande and many more that all bring something different to the overall taste of the album. For the die-hard power metallers we have stompers ‘Shelter From The Rain’ that could easily fit unnoticed on an Edguy album with the addition of Michael Kiske, ‘Another Angel Down’ that Jorn Lande stamps his authority all over and ‘Devil In The Belfry’ with the crazy highs that any good power metal favourite should have. Other highlights include the twisted ‘The Toy Master’ where Alice Cooper is used in his element to nightmarish results in a methodically paced song that really comes alive towards the end. The beautiful ‘What Kind Of Love’ also has life breathed into it by female pop-rock singer Amanda Somerville to majestic effects and title track ‘The Scarecrow’ is a great eleven-minute opus representative of the direction Avantasia has turned and the album as a whole. On the whole ‘The Scarecrow’ is only with a couple of forgettable tracks and boring moments. Being a long album, it nicely manages to make every track on the album something different and interesting. It may however be an idea to come into this with an open mind and no expectations, as the album is not a clone of the previous two full-lengths which may understandably put a percentage of the original Avantasia fans off, but with this direction there is no doubt it will pick up countless more that had never even given Avantasia a chance before. Whichever way to chose to form your opinion of the album, ‘The Scarecrow’ certainly shows the emergence of a more mature Tobias Sammet in glorious form.