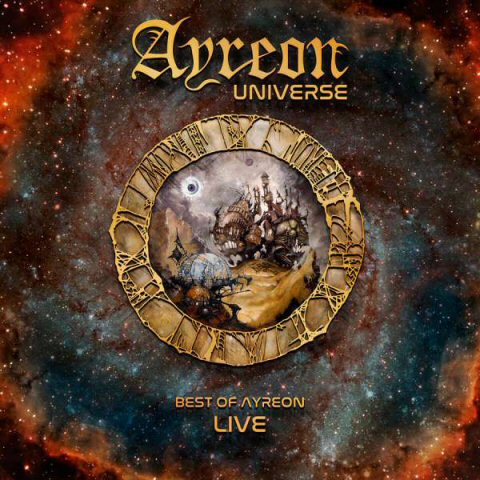 Triple lp on black vinyls with gatefold cover with gold foil on the sleeve.

In November 2016, Lucassen announced the first ever official Ayreon concerts for September 2017, entitled Ayreon Universe. The show featured 16 singers and 11 instrumentalists, all of which had previously worked together with Lucassen on his studio albums. Unlike The Theater Equation, it consisted of unrelated songs from Ayreon performed after each other as in a traditional concert, with a few songs from Star One featured as well. Performers included Floor Jansen, Marco Hietala, Damian Wilson (Headspace, ex-Threshold), Hansi Kürsch, Tommy Karevik, Jonas Renkse (Katatonia), Anneke van Giersbergen (The Gathering), and Edward Reekers (Kayak), among others, as well as Lucassen himself. The performances were recorded, and was released as Ayreon Universe – The Best of Ayreon Live. Almost 2,5 hours of audio divided over 3 vinyls