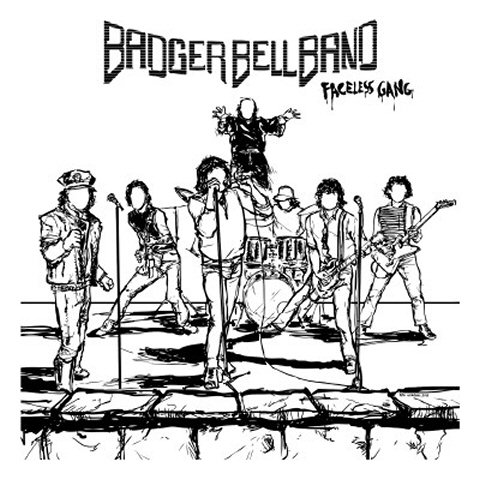 Badger (from Deeside) was quite an obscure act of the glorious N.W.O.B.H.M. era. They released two 7″ singles, “Rock the Vicar” (as the Badger Bell Band) in 1985 and the more popular “Over the Wall” (as Badger) a year later. However, it all started with a band called Noizegate. Guitarist Roy Baird, aka Bert, explains: “ My first band was called Noizegate, that was around 1980. We played 85% of original music which we wrote ourselves but the venues round Chester did not appreciate original material. So Badger Bell, the vocalist, sacked his old band and asked Noizegate to back him and our gigging status turned round from two a month to four a week. Hence we stayed with Badger. We did put some of Noizegate’s music in the set, like ‘Over The Wall’, ‘Faceless Gang’ and ‘Runaway’. Our first single was ’Rock the Vicar’ coupled with ‘Nothing left’. As we got heavier, the longer we were with the Badger Bell Band, we decided to change the name to Badger as it was a better title than the ‘something band’.” So this explains the name of the label for the “Rock the Vicar” debut single: Noizegate Records. It was named after the first band Bert was playing with. This is how it all happened: “Noizegate was our own label and this happened because we did not know how to attract a record company. We did not have a bank account but we earned a lot of money at gigs and kept it in a biscuit tin and paid for our records in cash. A part of the band’s gigging success was partially Noizegate but the name Badger was getting all the recognition. So we decided to use Noizegate as the name for our record label. Of the two singles, we pressed 1,000 copies each.” Behind the song “Rock the Vicar” there’s a funny little story: “Badger was ten years older than the rest of us. He always arrived late at rehearsals and the first thing he would say when he walked through the door was ‘evening vicar’. So this fuelled us to write a track called ‘Evening Vicar’. We found out that where Badger lived there were rumours of a vicar that used to be a flasher. So that’s how ’Rock the Viar’ came about. Funny story.“ As a little sidenote, Wally Rumsey of Wolf and Kruizer fame (see the split-album on High Roller Records) also played guitar for Badger (for roughly half a year), he does not appear on the two singles though. Although the Badger Bell Band did release two 7″ singles, in contrast to Noizegate they always played a lot of covers: “Noizegate played more originals and Badger as a solo singer was nearly all covers. So when we got together we compromised and I think it was 40% covers and 60% originals. We somehow always attracted bikers to our gigs up to the point we were asked to do more bike rallies than heavy rock gigs. One year we did 300 gigs due to demand. At the time we peaked, we played at the Northgate Arena in Chester and headlined our own gig to a sell out to over 1,000 people! After that gig I thought we were definitely going to get somewhere and then Badger phoned me up two weeks after and said he was packing the band in. My view was he was used to playing pub venues but the arena was a big venue and I think it frightened him.” The band Badger split up around 1990. This is how it all happened: “Our singer Badger went off with our drummer Gary Jones and formed a small pub blues band. They eventually folded up as Badger had vocal problems and they could not get many gigs. I carried on with Wayne on bass and Dave on guitar and joined up with some lads from a band called Cinema. We formed a pub biker party band called Dizzy Mama. Dizzy Mama went on to be quite a big band on the biker scene playing gigs and headlining in The Isle of Man TT Races for Back Street Heroes. We also sold out gigs at the Tivoli in Buckley which was up the road from us along with various support slots with Saxon, Ian Gillan, Girlschool, Magnum and Buster Blood Vessel. We have also just done a reunion gig last Xmas at the Saltney club and had 500 people dancing round the place.”