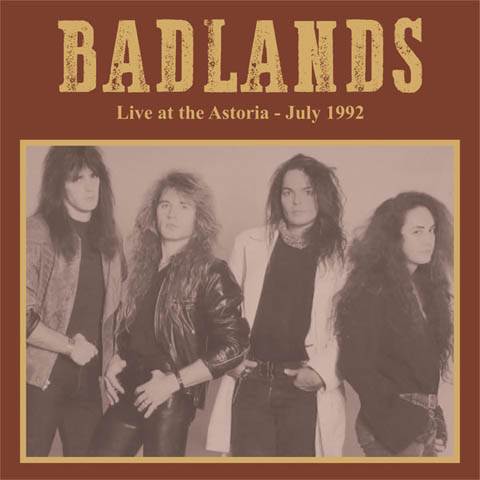 Badlands ‎–Live At The Astoria 1992 cd

Badlands stormed onto the scene in 1989 with their self titled debut album. Eric Singer soon quit after the album had been released; he later joined Paul Stanley’s solo club band and played with Kiss following the death of drummer Eric Carr. Badlands picked up Jeff Martin, former vocalist for Racer X and Chaisson’s bandmate in Phoenix-based bands Surgical Steel and St. Michael, to take over on drums. Disagreements arose between the band and Atlantic Records about musical direction, and also between Gillen and his bandmates about the inclusion on the planned album of songs he had written. Lee has recalled that, shortly after the first album’s tour in 1990, Gillen was first diagnosed with AIDS, and was starting to get really thin and didn’t look quite as healthy. After the band released Voodoo Highway in 1991, Gillen left the band as friction increased. Lee at the time announced he had hired Los Angeles native Debby Holiday, from the band Stiletto, to replace Gillen on their upcoming shows. Lee was interviewed about her by Kerrang! magazine. A black woman, Holiday was the daughter of songwriter Jimmy Holiday (best known for penning the Dolly Parton hit Put a Little Love in Your Heart). She was raised in Beverly Hills, and had performed in many of the Sunset Strip’s major clubs. Few of Badlands fans were familiar with her prior musical activities. The interview with Lee was published in issue No. 399; he talked only briefly about Gillen’s replacement and described his erratic behavior. However before the band were suppose to head over to UK in the summer of 1992 for their UK tour the band quickly drafted Gillen back to complete those dates. On July 2, the band played at the London Astoria, where this album is recorded and just a few songs in, Gillen pulled out a copy of the Kerrang! magazine that had been released with Lee’s story in it and shouted to the crowd “There’s two sides to every story” while Lee mouthed “It’s all true.” Still, the band played the rest of its set. In Kerrang! issue No. 400, Neil Jeffries reviewed the gig and claimed that he had never seen a band with so much tension play so superbly. He praised Lee’s guitar work and claimed the band were absolutely superb despite their obvious feuds. After the UK tour was complete, Gillen was officially fired from the band. Lee insisted to the press that the band would continue with singer John West. The band wrote and recorded some new songs; however, the combination of band discord and the general decline in the popularity of heavy metal music ultimately led Atlantic Records to drop the band from its label. On December 1, 1993, about three years after his initial diagnosis, Gillen died at his New Jersey home as a result of AIDS-related complications, caused by previous drug use.