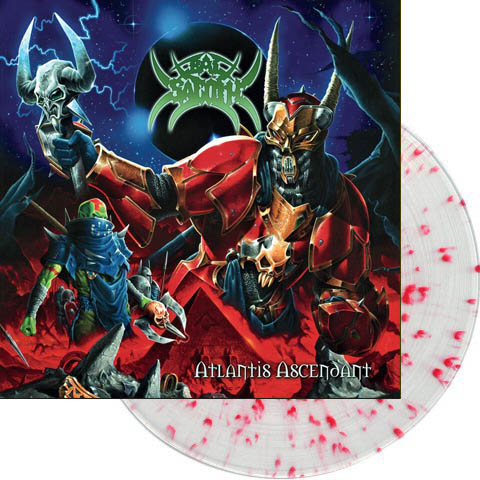 2022 re-issue on clear and red splatter vinyl with gatefold cover.

Atlantis Ascendant was Bal-sagoths first album to be recorded (albeit only partially) with digital recording technology. The album’s primary story and lyrical concept, written by vocalist/lyricist Byron Roberts, centers around the exploits of a fictional nineteenth century British archaeologist and adventurer named Professor Caleb Blackthorne III, who has dedicated his life to the field of antediluvian anthropology and to seeking out evidence as to the true nature of mankind’s origin. As with many protagonists in the Lovecraftian fashion, his investigations lead to madness and death. The band transcend all boundaries, striding over the limitations of the black metal genre Byron Roberts concept of dark fantasy/science fiction and ancient myths and legends.

Track list:
1. The Epsilon Exordium
2. Atlantis Ascendant
3. Draconis Albionensis
4. Star-Maps Of The Ancient Cosmographers
5. The Ghosts Of Angkor Wat
6. The Splendour Of A Thousand Swords Gleaming Beneath The Blazon Of The Hyperborean Empire Part III
7. The Dreamer In The Catacombs Of Ur
8. In Search Of The Lost Cities Of Antarctica
9. The Chronicle Of Shadows
10. Six Keys To The Onyx Pyramid