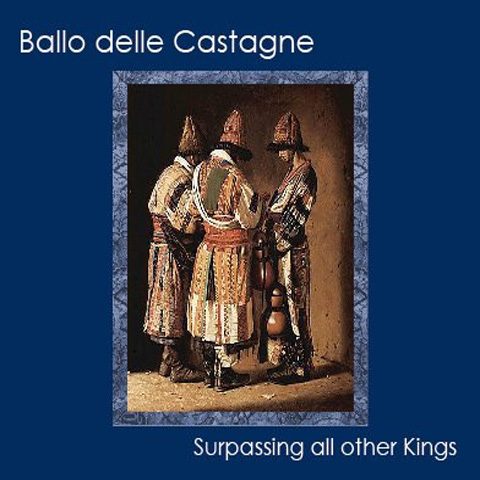 Il Ballo Delle Castagne is a Milan based collective led by the duo of vocalist/keyboardist/lyricist Vinz Aquarian and bassist Diego Banchero. Surpassing All Other Kings is the third installment in a trilogy by the group, the subject matter looking at universal mysteries of life and the universe. The last chapter of the trilogy is based on the first poem ever written in the whole history of mankind: Gilgamesh. The legendary king of Uruk and his incredible story was the very first step in this new journey of Ballo Delle Castagne. Beside the myth and the most obvious research of eternal life, the figure of Gilgamesh offer the chance to reflect generally on the constant problem of man to look always for an answer for all things in the universe. Indeed, the thousand year sleep of Gilgamesh is now interrupted by the challenge of a new search. The man has lost its meaning, its beliefs. The King rises up from his grave (somewhere in the universe) and starts a journey back to the earth, meeting new and old characters of the ancient saga. The mission is now to reach a new state of consciousness, embracing a new golden age called Aquarian Age. The sound of Ballo Delle Castagne is doomy and goth-tinged heavy psych recalls other dark and dramatic artists like Goad and Orne, and to an extent Areknames and Antonius Rex. The tracks feature both male and female vocals in a dramatic style, there is a theatrical flair to the presentation that is very RPI to the core even during the passages in English. (There is a mixture of language). This is an album that will please explorers of the dark, heavy/psych-prog, those fans who love Black Widow Records and their associated bands. Its an album that might even appeal to newcomers unsure of where to begin exploring these sort of albums. It is never endlessly gloomy, instead balancing easier-going pieces in numerous different styles, so it might serve as a suitable introduction. Vinz, Diego and their musical companions have released a fine dark work here.