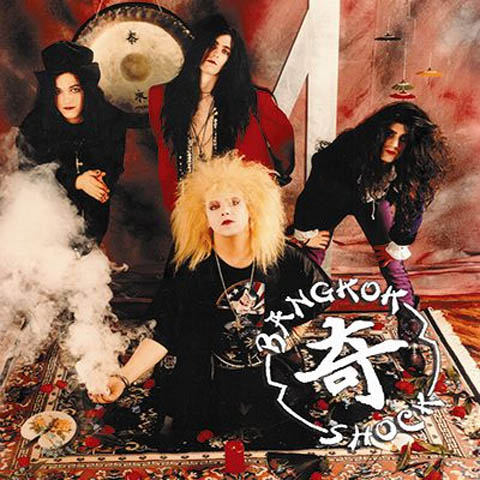 Bangkok Shock was the biggest band in Chicago for one glorious year. Debuting at the 1400 seat Vic Theater to an ecstatic crowd, the band featured a quartet of regional all-stars: Spider St. Valentine, Dezzy Ray and twins Brian and Darrell Masterson. The band’s chemistry was musically explosive from the day they met. Touted by the industry press as America’s answer to Hanoi Rocks, the band looked and acted the part of world-class superstars. Between the end of 91 and the winter of 92 Bangkok Shock wrote a prolific amount of material, recording when time and money allowed, and performing non-stop, including a sold out show at the world famous Avalon Nightclub to a wildly enthusiastic audience. Hype about the band spread quickly across the country and the band became friends with California based, purple coiffed rockers the Zeros, sharing the bill on several concert dates. Guided by the Los Angeles area Beverly Hills Records, Bangkok Shock recorded a four song E.P. While the work never got beyond the production of promotional copies, some ended up overseas and Bangkok Shock was asked to perform a series of dates in Europe by a British promoter. Events were moving quickly, so much so that there was no way to get the proper documentation everyone needed for the overseas shows in time. Spider rearranged the live set into a stripped down, solo acoustic version of the songs and brought the show to London at his own expense. Back home Dezzy, Darrel and Brian went on a media blitz, appearing for radio and magazine interviews. Everything was lined up for success. Reunited in the States after Spider’s return to Chicago, the band started a grueling tour schedule. Night after night of shows started weighing heavily on the band both physically and mentally, and when funding started to grow thin, passions started to wane. On a frigid and snowy night in Milwaukee Wisconsin, playing a club date while a blizzard raged outside, Bangkok Shock reached the financial end of the road. With no money and a broken down equipment truck, the band realized that they had reached the end of the tour. That night, the four members of Bangkok Shock went on to play their final show, but four different musicians came off stage, got into four separate vehicles and drove off in four different directions…la fin, ou est-il?