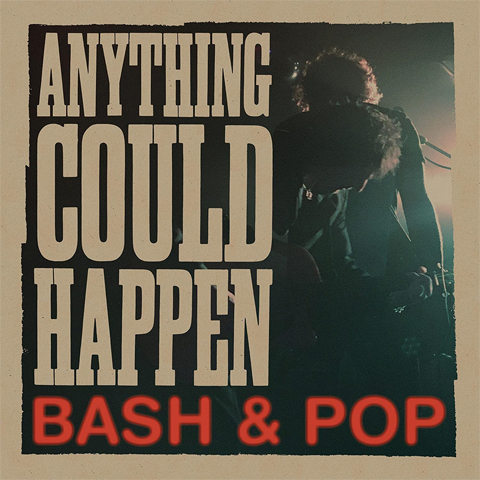 Bash And Pop –Anything Could Happen cd

When Tommy Stinson and Paul Westerberg reunited the Replacements for a concert tour in 2013, plenty of fans were hoping against hope that the new edition of the band would grace the world with a new album. That didn’t happen, but maybe it’s just as well. In the wake of the ‘Mats’ reunion hitting the ditch in 2015, Westerberg released one of his spunkiest rock n roll records in years, 2016’s Wild Stab, in collaboration with Juliana Hatfield under the name the I Don’t Cares. And Stinson has followed suit, reviving Bash And Pop, the short-lived but well-loved band he formed after the Replacements original 1991 implosion. Outside of Stinson, no one who played on Bash And Pop’s 1993 album, Friday Night Is Killing Me, appears on 2017’s Anything Could Happen, but the two records share a very similar sound and feel. Stinson has said that he wanted the return of Bash And Pop to sound like a band with a good vibe playing live in the studio, and that’s exactly what Anything Could Happen delivers. For these sessions, Stinson was joined by his core accompanists (Steve Selvidge on guitar and vocals, Justin Perkins on guitar and vocals, Tony Kieraldo on keyboards and vocals, and Joe Sirois on drums), with a few other players making guest appearances (including Luther Dickinson and Chip Roberts), and here the pieces fall together just right. The performances on Anything Could Happen have the sort of loose-limbed drive that the Faces made their trademark (and the Replacements strove to emulate), especially when Kieraldo attacks his electric piano with loving enthusiasm. Stinson performs with a perfect fusion of street-kid cockiness, regular-guy smirk, and occasional flashes on heart-on-sleeve philosophizing, and married to these rough-and-ready tunes, smart but never cocky about it, the effect is magic. Though Stinson is rarely as perceptive as Westerberg in his songwriting, here Tommy still sounds engaged with rock n roll in a way his former bandmate can’t always muster these days, and he strikes a more satisfying balance between middle-aged responsibility and arrested-adolescent swagger. We’ll probably never get that Replacements reunion album, but like Westerberg’s Wild Stab, Anything Could Happen effectively channels the best of what Tommy Stinson brought to the Replacements, and this unexpected Bash And Pop reunion has made an album just about as good — and every bit as much fun — as their minor classic from the ’90s.