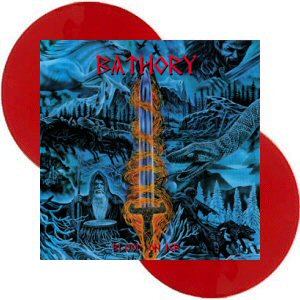 Bathory’s famed lost album, Blood on Ice, was originally recorded in the late ’80s, smack-dab in the middle of the Swedish group’s revolutionary transition from its barbaric black metal beginnings to the ambitiously orchestrated Viking metal of its golden era. At the time, the work was deemed far too big a departure by band mastermind Quorthon, who, among other things, shockingly substituted his raspy croak for actual singing throughout — but, as with any abandoned project, retrospective evidence also suggests that Quorthon was also less than secure about whether his songwriting and musicianship were yet developed enough to fulfill his vision. Shrouded in mystery for the ensuing half-decade, Blood on Ice was finally resurrected and completed (replete with story-advancing sound effects) to Bathory’s satisfaction in 1996, at which time it was released to widely deserved critical and fan acclaim, despite a few but distinct shortcomings that placed its overall achievement slightly below that of acknowledged triumphs like Blood Fire Death and Hammerheart. Sliding into gear rather slowly with tentative offerings like the title track, “One Eyed Old Man,” and “The Sword” (which sounds way too similar to Manowar’s “Blood of My Enemies”), the album eventually reaches cruising speed with outstanding moments like “The Stallion,” “The Woodwoman,” and the colossal “Gods of Thunder of Wind and of Rain,” whereupon Quorthon’s vocals (sometimes given to off-pitch variations) sound better than ever before. The gentle acoustic bridge “The Ravens” sets up the epic, nine-minute masterstroke of “The Revenge of the Blood on Ice,” which may single-handedly convince even the most cynical of listeners that this long-forgotten work deservingly belongs within Bathory’s hallowed canon. Also worth mentioning, the album’s lengthy (meaning biblically sized) explanatory liner notes read like a veritable Rosetta Stone for longtime Bathory supporters, shedding unprecedented historical light and perspective upon the group’s mysterious history.