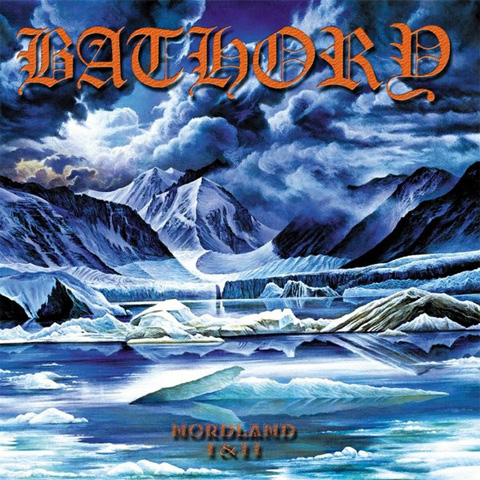 Bathory -Nordland I And II dlp

A two-album saga based upon Norse mythology, the first chapter of Bathory’s Nordland frankly comes off as somewhat less accomplished and, well, immense in scope compared to similar epic works conjured in recent years by new groups such as Edge of Sanity and Green Carnation. But before we drive a stake through Bathory main man Seth Quorthon’s black heart, let’s get some perspective here. Like many masters of old, Bathory’s music derives from an altogether different place and time, and, lest we forget, taking a template and improving upon it is usually far easier than creating the template from scratch in the first place. Therefore, much like Venom, who saw their thrash metal sketches developed to an entirely different level of musical mastery and compositional depth by the likes of Metallica and Slayer, so do Bathory’s once groundbreaking black metal overtures often seem elementary when compared to those of his dedicated former students — now competitors. Such is the fate of true pioneers, but you can bet the fjord that many of these ‘followers’ will pass into memory long before Quorthon puts away his blackened boots. Having said all that, the first installment of Nordland manages to blend grand symphonic metal schematics with Quorthon’s still quite noticeable New Wave of British Heavy Metal influences. Therefore, epic examples of modern black metal such as “Vinterblot” and the nine-minute title track share the spotlight with the refreshingly straightforward arrangements and staccato riffing of “Great Hall Awaits a Fallen Brother” and the thrash-happy “Broken Sword.” With its folky acoustic guitars, “Ring of Gold” is also pulled off quite convincingly, and the opening riff of “Dragon’s Breath” is a stone-cold classic; but the not-quite-effective operatic tones heard on “Foreverdark Woods” also remind us of Quorthon’s limited vocal range. Still, Nordland I’s many superlatives easily outshine its deficiencies, heightening anticipation for what’s to come on Nordland II. Nordland I’s compositional depth eventually rose to its defense over repeated listens, but one was nevertheless left with the feeling that this was an incomplete vision, making the arrival of Nordland II a few months later all the more urgent and necessary. Thankfully, this was exactly the case, as both albums’ individual weaknesses are greatly subdued by their unified strength. And yet, as has often been the case with Bathory’s latter-day albums, Nordland II only really starts to pick up steam after a few rather tentative songs, hitting its stride on this occasion with the gloriously marching “The Land” and its superior follow-up, “Death and Resurrection of a Northern Son.” The second truly encapsulates all the elements that have made Bathory great over the years, as it blasts into hyper-metallic territory with some furious riffing, then settles into a slower, though no less powerful mid-section before slowing it all down entirely for a melodic acoustic passage. Clocking in at ten, slightly bloated minutes, subsequent track “The Messenger” (replete with galloping hooves) is less effective, as is the even lengthier “The Wheel of Sun,” but once again, the problems here don’t involve a lack of substance or quality, so much as Bathory’s many prior triumphs in the same arena. Still, listen to both volumes of Nordland back to back (preferably while watching The Lord of the Rings with the sound turned off), and you’ll get a better grasp and appreciation for the entire magnum opus. Possibly too much to digest for neophytes, Nordland I and II offer a bountiful feast for serious Bathory followers.