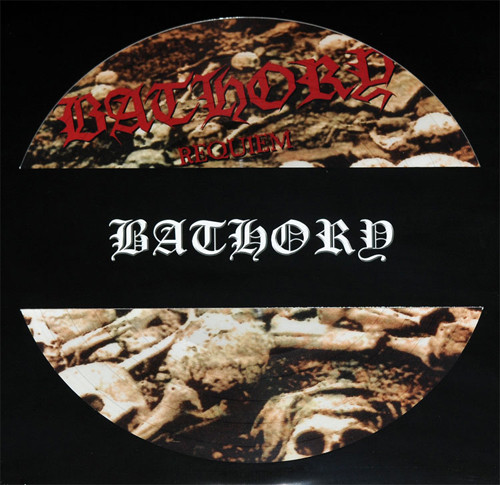 Bathory has always been a band that knows how to surprise style wise as they have been responsible for the first wave of Black Metal and later on Quorthon single handedly created Viking Metal. After that he came back to Black Metal and even Rock N Roll on his solo albums. This 1994 release came right after the epic masterpiece Twilight Of The Gods. Well let me tell you; if you like many others consider that to be the ultimate Bathory work and style this album is not for you. Not by a long way. The cover itself is a convincing hint already. Not having the beautiful landscapes or pictures like many of his other albums, Requiems cover is a simple black and white photo of skulls and bones. And the music is equally simple. No intricate and majestic compositions here but just a lo-fi assault with minimalist thrash-y Death Metal riffs and some of the most aggressive drums ever heard on a Bathory record, courtesy of a crazy drum computer. And that basically is the whole point of this album. I dont consider it an awful album like a lot of people do simply because it so over the top with everything. When you need an aggressive album this one is perfect. The riffs are simple but sometimes pretty good, the drumming is perfect for the whole atmosphere and of course there are some ridiculously fast solos on the album as well as Quorthons voice that is as rotten as in his best Black Metal days. By far not a horrible album; it just is a bit hard to digest knowing that Bathory also released metal classics like The Return, Blood, Fire, Death and Hammerheart.