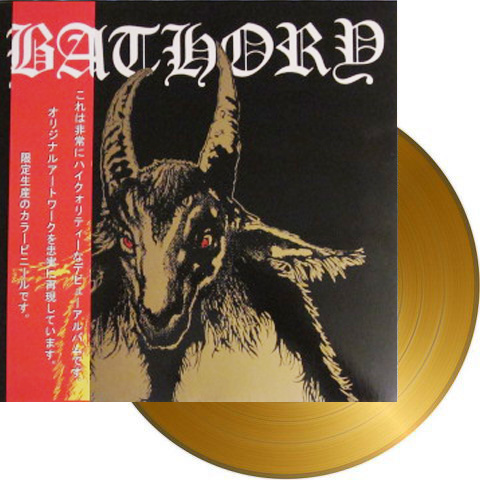 Re-issue on gold vinyl with lyric insert, OBI-strip and gold goat on cover

In a musical realm where scale of influence has little to do with commercial success, few originators of the extreme metal arts evoke as deep a sense of mystery, or incite such hushed, reverential tones of admiration, as Sweden’s Bathory. Essentially a one-man operation helmed by the mysterious Quorthon, Bathory’s development from the rawest form of embryonic black metal, to thrash, death, and back to its self-devised Viking-themed black metal, has mirrored and regularly defined the genre’s very evolution. Indeed, along with Switzerland’s Celtic Frost, Germany’s Kreator, and Denmark’s Mercyful Fate, they easily qualify as one the most important European extreme metal acts of the ’80s and ’90s. This record has a historical importance separate from its simple status as a musical statement. This album is regarded by many as the first black metal record. Opening with the ominous bells (Big Ben slowed down in fact) with a number of other sound effects, one is drawn into a dark world of shadows and flickering candles and a Luciferian power that seemes to have possessed Quarthon. Three minutes later Hades starts and be prepared for Quorthon hateful and grim vocals. The song is more old school and almost punky then most, but it still works and even in this song we given a slightly epic breakdown, which makes one think of what Bathory would end up with. Every song on here is a classic, some more then others of course, but each one is excellent. One thing though many think Bathory was ripping off Venom, this is due to the similar song-titles, and similar sound, but, even though Venom came first, Quorthon was not originally into the metal scene and was not even aware of Venom until after the release of this album for people kept comparing Bathory to Venom. I believe this is true, because many other bands (like Slayer, Sodom, etc.) would often use similar song titles, and the general feeling of Motorhead and Exploited meeting Black Sabbath was going around everywhere at this time, and given that, even though Quorthon states he was more influenced by Oi! punk at this time then metal (and I think punk musicians did the drums and bass) what he ended up creating was something beyond most metal and all punk, something inspired by a power much more demonic and evocative. The production does suffer, but it is actually better then the one on The Return. It really is quite powerful, and there is a reason why black metal fans, no matter if pagan or satanic or nihilistic will almost always cite early Bathory as being one of the best, that is because it is, and it still holds up, none of this has aged, it still has the same necromantic power it always has had. So in closing, if you like black metal and have not heard this or the other old Bathory albums then you cannot really consider yourself a real black metal fan. Bathory is the beginning of everything and you must listen to these albums. This one is in particular as important as any of the others, for it helped to create the type of sound and feeling that most black metal bands later would go for. Ancient, warlike, spectral, demonic black metal, that even if it has some Motorhead moments never loses the evil atmosphere. This is an essential must have album.