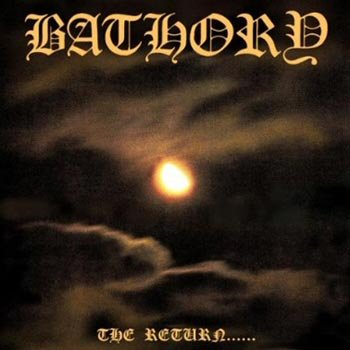 Like their eponymous debut of a year before, Bathory’s 1985 sophomore effort, The Return……, was an unbelievably coarse proto-black metal album influenced almost exclusively by the earlier works of Venom. But make no mistake: such was the genre’s state of infancy at the time that, even though it was once again recorded under the most inadequate of circumstances at the auto repair garage Quorthon sympathetically baptized Heavenshore Studios, the album’s impact still proved nothing short of revolutionary. Even more than that, The Return…… effectively represented chapter two in the Scandinavian black metal history book; with virtually all of its sonic tenets — from the satanic lyrics, hoarse shrieks, buzz-saw guitars, and high-speed drums characterizing demonic punk-thrashers like “Possessed,” “Reap of Evil,” and “Son of the Damned,” to the evocatively titled intro piece, “Revelation of Doom” (all rumbling bass noises and tortured screams) — later regurgitated like bloody gospel by legions of loyal younger musicians. And if it’s true that several tracks suffered a little more glaringly from those substandard production standards (notably the off-time mid-section of “The Rite of Darkness”), when they contained the slightly more distinctive riff or chorus, album highlights such as “Born for Burning,” “Sadist,” the masterful “The Return of the Darkness and Evil,” and even the almost laughingly Venom-derived “Bestial Lust (Bitch),” became and remain irresistible slices of primeval black metal to this day. Latter-day black metal enthusiasts may wonder what all the fuss is about, given the above being such ingrained and mundane aspects of the genre they now know; but that’s exactly what confirms The Return……’s seminal stature in the annals of extreme metal.