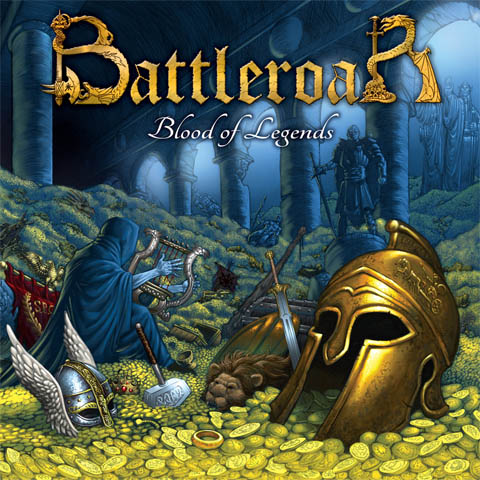 Reduced price due to upper spine being vg+

2014 marked the return of the epic heavy metal act Battleroar, six years after their last release To Death And Beyond. With a renewed line-up which features Gerrit Mutz (Sacred Steel) on vocals, Battleroar delivers the goods under the form of an unrelenting, full-on-atmospheric ride into the glory of Hellenic mythology and history. But the most prominent additions to this album isn’t necessarily the new frontman: it’s the new violinist, Alex Papadiamantis, whose inclusion really pushes the music to a much higher echelon that can be heard on the instrumental opener, Stormgiven. From then on, his occasional inclusions always remain memorable and melodic, and never do they seem shoehorned in or contrived. Its epic metal so some songs have a rather long average runtime but they can be anyting from folky melodic metal, along the lines of Falconer, to growled and intense passages or even symphonic like Exile Eternal. Fans of epic metal will find a lot to like here. Great music, better-than average lyrics, with a sound that is a natural evolution for the genre. Highly recommended for fans of Omen, Cirith Ungol, Solitude Aeturnus, Agent Steel, Virgin Steele, Manowar etc.