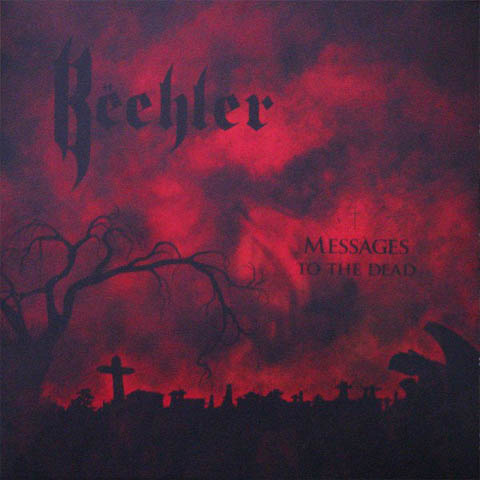 Beehler -Message To The Dead lp

The muscle of Exciter is back! The voice of Exciter is back! Anyone who has seen the man live at his two Headbangers Open Air shows will know: This guy rocks. It is quite a mystery why it has taken so long for Dan Beehler to put out his debut solo effort called ‘Message To The Dead’. Songs like ‘Jet Black’, ‘Eternal Tormentor’ or the breathtaking ‘Destroy’ are every ounce as good as anything on ‘Heavy Metal Maniac’ or ‘Violence And Force’. Dan Beehler without Exciter works very well, whereas Exciter without Dan Beehler … that’s a totally different story! ‘Message To The Dead’ is an instant old school Thrash classic – written and performed by one of the genre’s originators. Dan Beehler explains why it has taken so long for his first solo effort to see the light of day: “We all had other things going on in our lives over time and we did the album on the side, so it took a lot longer than we thought, but its great to finally get it done and get it out. The release of “Message To The Dead” spurred a lot more activity in the Beehler camp: “We already have five songs written for the next Beehler album and they’re a little more straight ahead like old Exciter. All of the songs have a special meaning to me, the lyrics are about my life and the people who have touched my life over the years. Hopefully the new record does well. I have to start at the bottom and work my way up, hopefully people like the record as much as we do.” At least I do, that’s for sure … As Dan Beehler was the driving force behind Exciter as well as guitarist John Ricci people are no doubt curious about what their current relationship with each other is. Surprisingly, there has not been any bad blood between the two: “I speak with John all the time now, things are great between us and I wish him all the best. I have a lot of respect for John. He told me Exciter had to rush to finish their last album, so it didn’t turn out too well. The new Exciter is very different from the old, but they have their fans, too.” This might be the case but as I have seen them both live, Exciter with Jacques Belanger and Beehler, and if you compare the two bands – there is really no competition. Dan Beehler comments: “I thought Jacques Belanger was a great singer but when he’s singing those old Exciter songs, he gets constantly compared to me. He did his own stuff really well. I think we will reach all Exciter fans with Beehler. When we play the old Exciter songs live, it sounds a lot like the old days because of my vocals. Sean and Scott keep the guitar pretty true to what it was back then”. Dan Beehler and John Ricci formed the band way back in 1979 as Hell Razor. They then changed their name to Exciter and recorded their first song “World War III”. This means, along with Riot, The Rods and Anvil the one and only Exciter are the true forefathers of US Speed Metal. Dan Beehler explains: “At the time we changed our name to Exciter, obviously we listened to Priest, Motorhead, Venom, Saxon, Raven etc. We were never really influenced by the punk scene, but thought it was cool. I think us and Metallica were well aware of each other before our first albums. There was a huge underground tape trading scene and I remember having the ‘No Life Till Leather’ Metallica demo.”