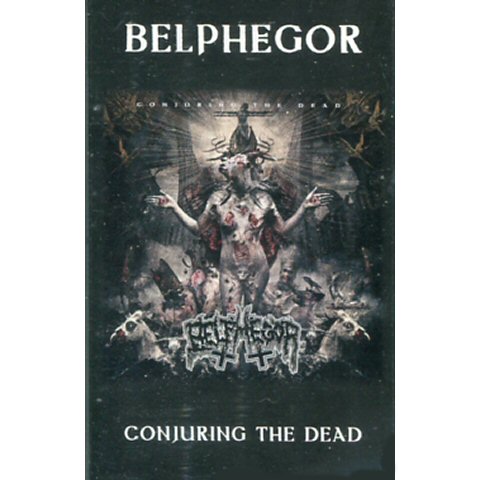 After allowing themselves an uncharacteristically lengthy period of time to lick their wounds (and let frontman Helmuth recover from a typhoid infection that nearly killed him), Belphegor blast back onto the scene with another full-length in 2014s Conjuring The Dead. This album is the tenth proper record from a band that long ago established themselves as the absolute best musical exports ever to emerge from Austria. Conjuring finds Helmuth and Company mostly decapitating the listener with their own brand of furious and crushing extremity. But with that said, this record is also arguably Belphegors most experimental offering to date. It finds some tempo variation, and even a few heavenly melodic guitar flourishes to enter the picture, thus also helping to produce a definite leap forward in quality of songwriting, and forming a significant amount of texture and increased number of standout tracks. The title song briefly takes a break from its huge, crunching, doom-soaked riffs and brutal, commanding, bottom-of-the-gut-scraping bellows to incorporate a gorgeous little bit of colourful acoustic guitar nuance, as well some fleeting use of operatic-sounding backing vocals. The end result is a song that establishes a fantastic juxtaposition and one that brilliantly offsets crushing extreme metal with misleadingly peaceful melodies. And later cuts, including Rex Tremendae Majestatis and the closing Pactum In Aeternum, work similarly. The former of these two tunes opens with a sombre-sounding bit of acoustic guitar melodicism before eventually taking flight with pummelling blasts, steamrolling guitar leads, and roaring vocals. Said acoustic guitar work makes another appearance later on in the track, too, and a cool little (and surprisingly technical) bass solo also highlights the arrangements, here. And most of the rest of the record finds Belphegor doing what they are best at: Hammering out deeply-cutting, pain-inducing death metal with blackened tinges and at neck-achingly fast speeds. Opener Gasmask Terror barrels and steamrolls out of the starting gate like many-a-great Marduk and old-school Darkthrone song, spitting sparks as drives the rhythms, rattling off one pummeling, rat-tat-tat machine gun fast gravity blast after another, and doing so with impossible ease. The song is also of note for working up a mean, thrashing guitar groove, featuring bah-roo-tal vo-kills, and also ripping out a mini but wild, Slayer-ish guitar solo in the process. Conjuring The Dead is the sound of a band hitting on all cylinders, and clearly having quite a bit of fun as they simply shred your speakers and rattle the foundation around you to its very core. So yeah, the point here is that there should be absolutely no debate as to the fact of whether or not Belphegor are back, and are sounding as dangerous, vibrant, and focused as ever. That fact alone should make Conjuring The Dead a worthy purchase.