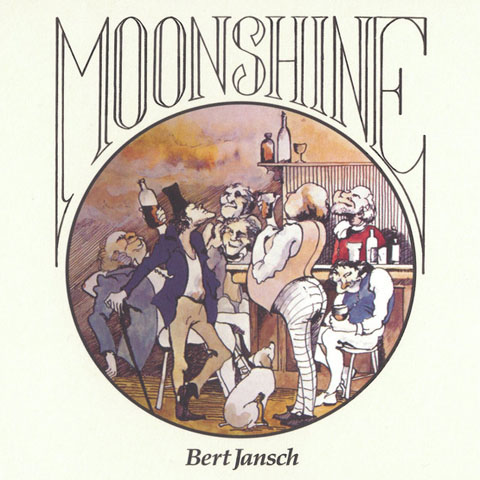 Even when performing with others, Bert Jansch has always continued his solo career. Moonshine was recorded in 1972 and released in 1973, and while it gained little attention at the time, it is greatly superior to later Pentangle efforts like Reflection. The arrangements are fuller than on his earlier solo work and more varied than Pentangle’s, creating a distinct folk-rock sound. There are violins, harps, harmonicas, and even electric guitar. Things get started with the traditional “Yarrow,” highlighted by a lovely flute, and brought to fullness by Jansch’s deep vocals and acoustic guitar. Tony Visconti’s bass work and Dave Mattacks’ percussion build a sturdy bottom end that perfectly underlines the other players. The original “Night Time Blues” receives a nice boost from Aly Bain’s fiddle, while “Oh My Father” is tinted with Gary Boyle’s stinging guitar. Ralph McTell adds bluesy harmonica to “Brought With the Rain,” and Jansch strips things down to voice and guitar for “Twa Corbies.” In fact, there are no bad cuts here. Jansch is in great voice throughout this project, and sings all except one cut alone. His duet with Mary Visconti on “The First Time Ever I Saw Your Face” is fascinating. Her alto voice, like Jacqui McShee’s, offers a perfect contrast to Jansch’s deeper pipes. The arrangement is also intriguing, allowing Visconti to enter each stanza half a step behind Jansch, overlapping with the same lyrics. Danny Thompson produced the album, lending a hand to its beautiful, dense sound. For Jansch, Pentangle, and folk-rock fans, Moonshine will be a real find.