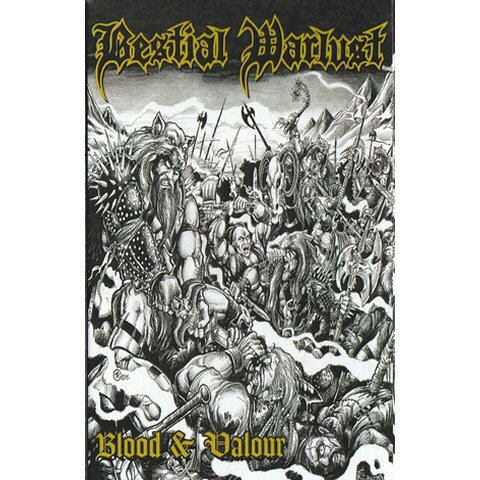 One of Australia’s first black metal bands of note, the wonderfully named Bestial Warlust arguably still qualify as one of its most extreme ever. Inspired by the bloodthirsty Scandinavian masters — Darkthrone, Mayhem, et al. — Damon Bloodstorm (vocals), Chris Corpsemolester (guitar), Keith Destroyer (guitar), Joe Skullfucker (bass), and Markus Hellcunt (drums) founded the group in the early ’90s, and issued their savage debut album, Vengeance War Til Death, in 1994. The similarly evil sophomore Blood And Valour arrived a year later and featured a new guitarist and bassist in Chris Masochist and Phil Gresik, respectively; but Bestial Warlust would splinter soon thereafter due to the musicians’ many competing music projects — most notably with Gresik joining former guitarist Keith Destroyer in Destroyer 666. The style here was not largely different than Vengeance War Till Death. Still a mix of black and death metal extremity, leaning towards the former, but what stands out here is the great production. Where the previous work was simply the back alley metal band of downtown Hades, this new Bestial Warlust were equipped to rock the finest underground clubs and tear the ears from their listeners, leaving them wanting even more. Damon Bloodstorm’s vocals here took on more of a direct, malevolent hostility, though maintaining the previous tones. On a scale of all things evil and punishing in Australia, Blood And Valor ranks up there with Hobbs’ Angel of Death, Ivan Milat and Sadistik Exekution a bonafide classic of early Australian extreme metal. This cassette comes with one bonus track which is a cover version of a Bathory tune that only friends to the band have been able to hear before