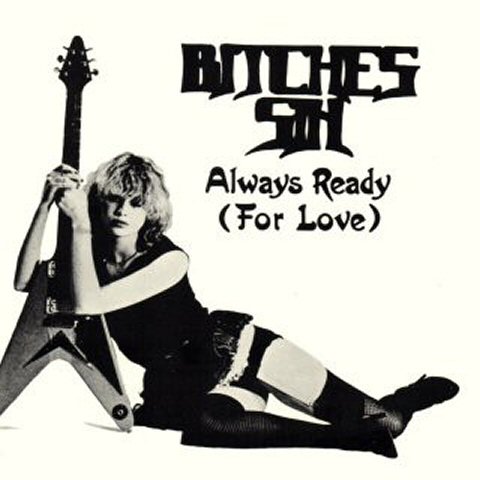 Mini cd replica of the debut single from Bitches Sin. It features the same tracks like on the original single. Official reissue authorized by the band in a limited run of 500 copies only.

Formed in April 1980 and with a name chosen; One night after we’d been out on the beer, admits Ian Toomey. There was Page Three kicking off and lots of sleazy stuff happening, and it sounded like a show-stopping name to us. Bitches Sin wasted little time in getting into a studio, venturing to Smile Studios in Manchester in August 1980 to record their first demo £12 And No Kinks. The seven-track tape came to the attention of Neat Records who offered to issue a single, and the result of this was the band’s debut release Always Ready (For Love). A great single in its own right, the seven-incher was soon to be over-shadowed however by two other recordings made at Neat’s Impulse Studios – a re-recording of Down The Road from the demo tape (which had been recorded as the same time as the single and which appeared in May 1981 on the aforementioned Lead Weight compilation cassette), and the attention-grabbing Strangers On The Shore, for many people the highlight of Heavy Metal Records Heavy Metal Heroes LP.