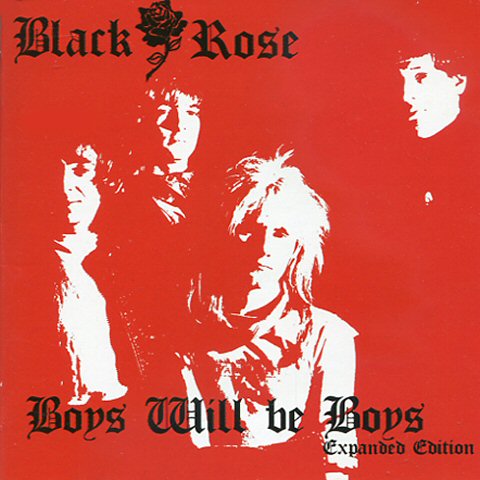 The New Wave Of British Heavy Metal was far from being one single coherent movement. Geographically it stretched from Scotland (Edinburgh’s Holocaust) to the Channel Islands (Jersey’s own Legend). There was even a band active on Gibraltar, namely the fantastic Oracle (in case you really want to stretch things). And we all know that musically it also was a very diverse affair. In the end, only Iron Maiden became superstars (some would argue Def Leppard as well). Saxon endured. The Tygers Of Pan Tang had their fifteen minutes of fame. Most of the bands, however, released just one single and then disappeared forever. Not so Black Rose! Formed in Cleveland in the late 1970’s, they showed a lot of promise, recorded two 7″ singles, two 12″ EP’s and two albums but split up before breaking through to the mainstream market. There first 12″ was released by Bullet Records and i can still remember when i first heard it and how impressed i was by the sheer energy and good production of the material. Vocalist and guitarist Steve Bardsley is also still very much proud of the self titled EP: “Bullet were a massive UK rock distributor in the 1980’s, exporting British rock music records all over the world. They formed a record label and we were asked to release some stuff for them which we were more than happy to do. I guess I started to write songs with a bit more melody and we began to use harmony vocals a bit more along with the more sing-a-long-a choruses.” Finally in 1984, at a time when the New Wave Of British Heavy Metal movement had already reached its peak, the first long player “Boys Will Be Boys” appeared. I still have a soft spot for the album although it was a long way off from the raw heavy metal sound of the first single. “It was a progression I suppose”, finds Steve. “We were all getting a bit better at everything. I was improving as a song writer and so was the musicianship of the band. It showed in our songs. It was the first time we’d spent as long as two to three weeks in a studio, so it allowed us a bit more time to experiment with the album and try to release something a bit better than we’d done before. Supporting the record we played at the Dynamo club in Holland which was an amazing gig. Those guys were really up for it and we had a fantastic time. We would have loved to play more over in Europe but sadly the opportunity never came for us again.” This anniversary edition features the self titled 1983 EP and the Boys Will Be Boys album together with the exclusive single track, Liar.