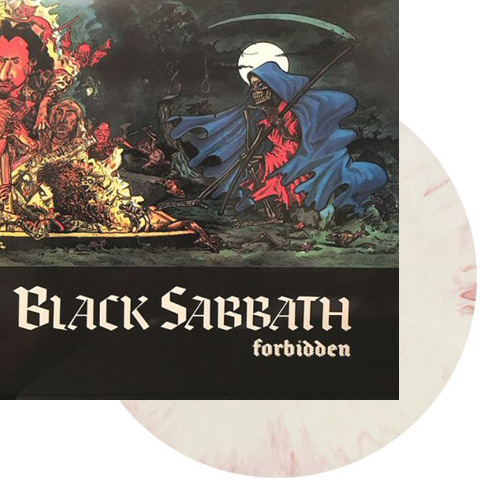 Iommi, Martin and Powell come back to give a very enjoyable music experience in Forbidden. With bassist Neil Murray and long time Sab keyboard Geoff Nicholls adding to the mix. Its a very refreshing throwback to early Sabbath. Dark, moody and bluesy. The opening track Illusion of Power, features Ice T In the middle during a thundering rhythm that makes this a sinister track. Then the blistering Get A Grip takes off, ripping riffs from two previous Black Sabbath tracks, Zero the Hero and Buried Alive. Tracks like Shaking Off the Chains, Rusty Angels, Guilty As Hell, Sick and Tired and the title track are pure blistering blues hard rock gems from Sabbath at a time when the latest trend was to have a vocalist that sounded like Cookie Monster on acid. The epic Kiss of Death is possibly the strongest song from Sabbath during the 90’s. And, the ballads I Won’t Cry for You and Can’t Get Close Enough To You are very akin to stuff from early albums like Sabotage and Technical Ecstasy. As much as I love Cross Purposes, I have alot of trouble with Bobby Rondinelli, who just so happened to step back into Sabbath when Cozy left on the Forbidden tour. He’s a great drummer, but there’s just something too generic about the way he is microphoned (he had the same problem in Rainbow, another band where he was hired to replace Cozy Powell). Cozy Powell could never be replaced! He played the double-bass drum kit like Geezer Butler played bass guitar (one of a kind). Cozy had quit Sabbath mid-way through the Forbidden tour due to the fact they all knew it was the last Black Sabbath album to fulfil a contract with IRS before the original line-up reunited, and he was rightfully disgusted with all that. Really, the whole band was. But the way they just went into the studio and free-jammed was so cool! And raw! But, either way, this is a sizzling rocking album. Black Sabbath fans make a huge mistake I see by comparing Black Sabbath albums to other Black Sabbath albums, instead of comparing them to other music that was coming out at that particular time. I even made the same mistake in the mid to late 80’s during what was called the Tony Sabbath era. But, I now realize what a mistake that was, for the Sabbath sound is there, and awesome at that; possibly some of the best they ever made. Ozzy was a very distant memory to me and a lot of fans by this point, Dio and Gillen (Ray Gillen, not Ian Gillan) were the vocalists to compete with by then. Forbidden is a real mean Sabbath studio album, and it really pains me to see so many people hating it with such passion, when, ironically, there is such passion in the recording of this album. Hopefully time will be kind to this album, and it will eventually find the right fan base to appreciate its greatness.