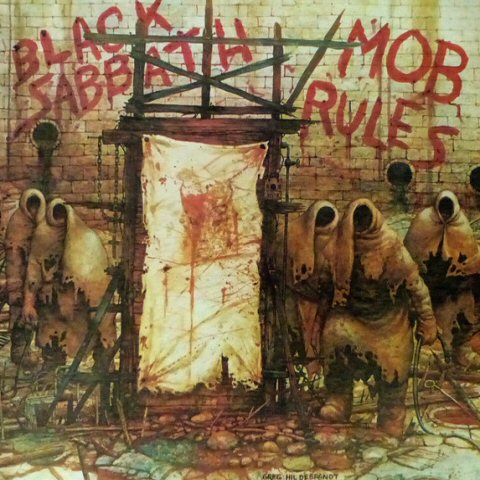 1981’s Mob Rules was the second Black Sabbath album to feature vertically challenged singer Ronnie James Dio, whose powerful pipes and Dungeons and Dragons lyrics initially seemed like the perfect replacement for the recently departed and wildly popular Ozzy Osbourne. In fact, all the ingredients which had made their first outing, Heaven and Hell, so successful are re-utilized on this album, including legendary metal producer Martin Birch (Deep Purple, Whitesnake, etc.) and supporting keyboard player Geoff Nichols. And while it lacks some of its predecessor’s inspired songwriting, Mob Rules was given a much punchier, in-your-face mix by Birch, who seemed re-energized after his work on New Wave of British Heavy Metal upstarts Iron Maiden’s Killers album. Essentially, The Mob Rules is a magnificent record, with the only serious problem being the sequencing of the material, which mirrors Heaven and Hell’s almost to a tee. In that light, one can’t help but compare otherwise compelling tracks like “Turn Up the Night” and “Voodoo” to their more impressive Heaven and Hell counterparts, “Neon Knights” and “Children of the Sea.” This unhappy streak is finally snapped by the unconventional “E5150,” a synthesizer-driven instrumental. Then, the unbelievably heavy, seven-minute epic “The Sign of the Southern Cross” delivers one of the album’s best moments before unleashing the roaring title track. Side two is less consistent, hiding the awesome “Falling off the Edge of the World” (perhaps the most overlooked secret gem to come from the Dio lineup) amongst rather average tracks like “Slipping Away” and “Over and Over.” Over the next year, the sh*t would hit the fan for Black Sabbath, and Dio’s exit would mark The Mob Rules as the last widely respected studio release of the band’s storied career.