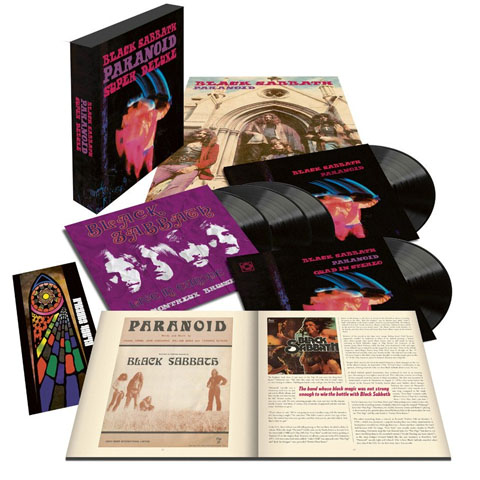 Paranoid was not only Black Sabbath’s most popular record (it was a number one smash in the U.K., and “Paranoid” and “Iron Man” both scraped the U.S. charts despite virtually nonexistent radio play), it also stands as one of the greatest and most influential heavy metal albums of all time. Paranoid refined Black Sabbath’s signature sound crushingly loud, minor-key dirges loosely based on heavy blues-rock and applied it to a newly consistent set of songs with utterly memorable riffs, most of which now rank as all-time metal classics. Where the extended, multi-sectioned songs on the debut sometimes felt like aimless jams, their counterparts on Paranoid have been given focus and direction, lending an epic drama to now-standards like “War Pigs” and “Iron Man” (which sports one of the most immediately identifiable riffs in metal history). The subject matter is unrelentingly, obsessively dark, covering both supernatural/sci-fi horrors and the real-life traumas of death, war, nuclear annihilation, mental illness, drug hallucinations, and narcotic abuse. Yet Sabbath makes it totally convincing, thanks to the crawling, muddled bleakness and bad-trip depression evoked so frighteningly well by their music. Even the qualities that made critics deplore the album (and the group) for years increase the overall effect the technical simplicity of Ozzy Osbourne’s vocals and Tony Iommi’s lead guitar vocabulary; the spots when the lyrics sink into melodrama or awkwardness; the lack of subtlety and the infrequent dynamic contrast. Everything adds up to more than the sum of its parts, as though the anxieties behind the music simply demanded that the band achieve catharsis by steamrolling everything in its path, including its own limitations. Monolithic and primally powerful, Paranoid defined the sound and style of heavy metal more than any other record in rock history.