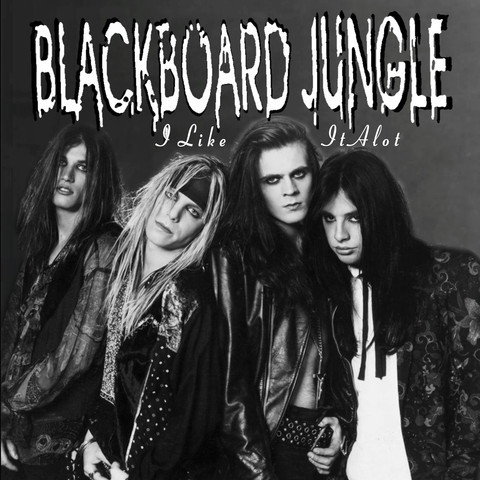 Blackboard Jungle is a hard rock/glam metal band from Los Angeles, California, USA, that was formed at the beginning of the 1990’s out of members of Filthy Rittz. Blackboard Jungle became one of the most talked about bands on California’s Sunset Strip rock scene. The line-up at this point consisted of Kenny Price (Vocals), Dave Zink (Guitars), Britt (Bass), and Joel Faith (Drums). The band garnered the attention of Faster Pussycat’s Brent Muscat, who produced some of the band’s early recordings, and helped them begin to make headway on the scene. Blackboard Jungle would later tour with Faster Pussycat and open for them on a tour a few years later. 1992 saw the band release their debut album I Like It Alot on Church Records, and also opened the door for the band to play in Japan for an eager audience. The band would record one more album in 1994 andn broke up soon after. In the early 2000’s, Blackboard Jungle reunited with all 4 original members to play a reunion show on their home turf in Hollywood. The show was a success and the band continues to play annual reunion shows to this day. These shows have helped create a resurgence of interest in the late 80’s/early 90’s Sunset Strip music scene due to the band sharing the stage with other notable bands from the scene, also reunited, including Swingin’ Thing, Glamour Punks, Fizzy Bangers, Imagine World Peace, and more. So here you have it, a Hollywood classic from arguably one of the hottest bands to ever grace the Sunset Strip – Blackboard Jungle!