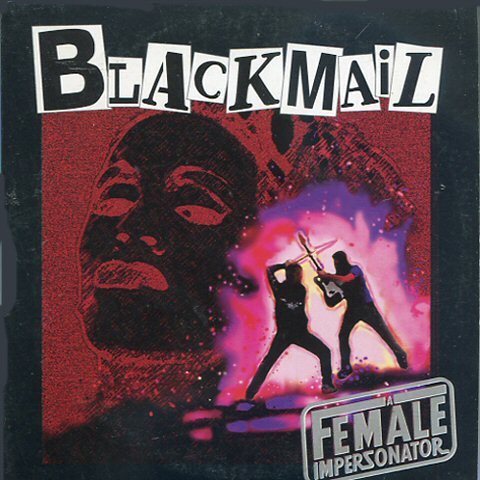 Signed by Jens Lundsbye on the backcover

Blackmail from Gothenburg was founded back in 1992 and was first introduced to the bigger masses with the Rockslaget 1994 competition and can also be found on the compilation album from that year. They were often seen upon as one of the most interesting unsigned bands in Sweden. Unfortunately they would remain unsigned until they split up. Two mini cds in cardboard sleeves were released by the band themselves during their active years. Their first Schizophrenic (1994) was produced by Mattias Ia Eklundh from Freak Kitchen while they second A Female Impersonator was produced by the band themselves. This is heavy metal with some breaks and different time signatures sometimes technical and at others progressive. The first track A Female Impersonator, is a heavy track that then swifts to soft parts and then sounding like mid 90s Faith No More and at times the vocals even have parts sounding similar to Michael Patton. The next track starts out vaguely progressive with a some repetitive patterns after which a heavy rhythm guitar takes over. The vocals here is more in the direction of Danzig. The last track borrows some riff from Go To Hell with Alice Cooper. Lots of work have been put behind this mini album and its twists and turns to make the tracks really interesting. I however find it hard to use the word progressive to much as i cant see this attract fans of Genesis or Yes or even Dream Theater. Its melodic but still very heavy sounding. Very good music and in an overcrowded metal scene its good to find acts that dare to be a bit different.