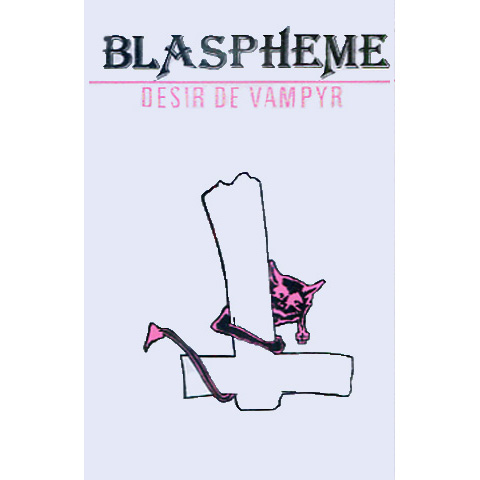 Blasphemes first album had a few great songs but they were few so for the second album it looks like they sat back, carefully reviewed everything that was wrong with themselves, looked at countrymen Sortilege and probably Mercyful Fate too, and rectified just about everything that was wrong with their style before recording the follow up. The rock influences is toned down on ‘Desir De Vampyr’ and the songs are much darker. Singer Marc Ferrys minor faults on the debut are also gone for this album. Here his tone is clear as a bell, and he hits the notes perfectly. He usually sings in a powerful tenor range, but sometimes goes up for some falsetto or a shriek (like on ‘Au Nom des Morts’). He’s not as over-the-top as Zouille from Sortilege, or as aggressive as High Power’s Patrick Malbos, but he nonetheless provides a great performance. Adding to this is the production: it’s perfect, with a guitar tone that’s clear yet rough enough to feel heavy and aggressive. The riff style is a bit harder to describe, as sometimes they’re very simple, at other times much more drawn-out, and while some are fast, others are genuinely doomy; still, if you imagine darker NWOBHM such as Angel Witch mixed with 70s Judas Priest, and maybe some Accept thrown in, you won’t be too far off. Mercyful Fate could’ve had some influence on ‘Desir De Vampyr’ as well, but Blaspheme started out before the Danes were well-known. The first part of the title track even reminds me of Candlemass with that slow, plodding, ominous riff, and this is before ‘Epicus Doomicus Metallicus’ even came out! Of course it explodes into more typical Blaspheme-style heavy metal after a while, but for a good minute and a half it’s pure doom. One of the best parts of the album is that they never break the atmosphere; a morbid mood pervades the whole thing, with no crappy tracks to interrupt the flow. ‘Desir de Vampyr’ wins Blaspheme their place among the Three Musketeers of French metal, and finally earns that Satanic logo and name they already had on their first album. They lacked the aggression and raw strength of High Power, and didn’t have the same dramatic flair and consistent catalog of Sortilege, but Blaspheme still managed to write some fucking solid metal songs here; the dark atmosphere that dominates the album is untouchable, and cements ‘Desir de Vampyr’ as one of the best albums of the woefully underappreciated French heavy metal scene.