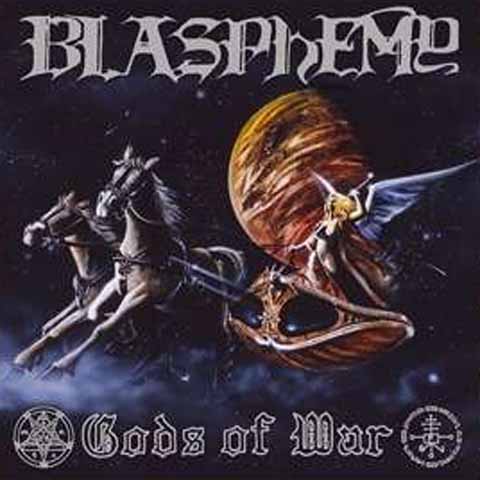 Blasphemy -Gods Of War/Blood Upon The Altar lp

Canada’s Blasphemy wins the award for the most innovative and drawn-out names in all of metal. Blasphemy was one of the original black metal bands of the second wave. The band was initially formed in 1984 by singer/bassist Nocturnal Grave… and drummer 3 Black Hearts…, but it isn’t until 1986 that the band is officially knighted Blasphemy. A demo called Blood Upon The Altar was recorded at Fiasco Brothers Studio in 1989 that sold over 1000 copies and after a tour of the United States the band signs to Wild Rags records for their debut album Fallen Angel Of Doom. There second album Gods Of War was released on Osmose records in 1993. There second album combines the best elements of black metal (morbid atmosphere, chaotic structuring and Satanic bluster), death metal (disharmonic instrumental prowess and vomited vocal assaults) and even grind (short, to-the-point songs and a general habit of not fucking around), and single-handedly created the monstrous subgenre known as War Metal. While the debut, Fallen Angel Of Doom, is in it’s own right a vicious slab of hateful aggression, Gods Of War still stands as their definitive musical statement. There’s really no point dissecting this album song-by-song, since it mostly blurs together in a short, nasty mess of metallic fury. Each track rushes at you with the speed and force of a freight train, not bothering to stop for anything or anyone. A few scattered intro pieces help to break things up a little, but that’s only to let you breathe a bit before the next beating. Unfortunately the album is only 20 minutes long. It’s a good thing, then, that Osmose chose to tack the classic demo Blood Upon The Altar onto the disc – and also amusing that it takes up more than half the total playing time. This demo is more grounded in classic black metal than Gods Of War itself – the vocals and riffing are more obviously influenced by Bathory and Venom, while the drumming tends to be more streamlined and less blasting. These songs have several creepy keyboard/effect pieces here and there, while the production is raw as fuck but amazingly clear all the same. So overall, you get nearly 42 minutes of brutal blackened war metal and a testament to the majesty of primal noise.