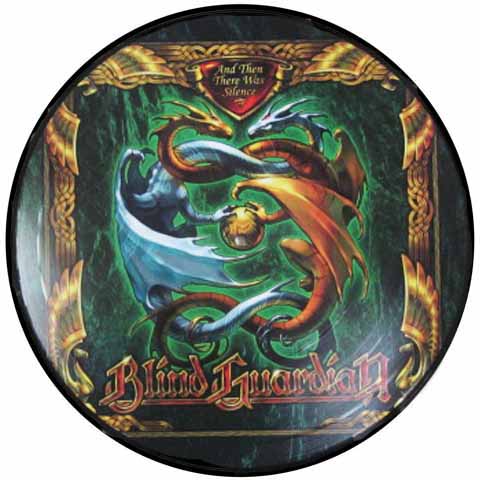 Blind Guardian -And Then There Was Silence pic disc

After a few years of having one’s mind blown by the band’s sixth album Nightfall in Middle-Earth, the anticipation for its followup was running extremely high, as Blind Guardian were a band that could do no wrong. The single for And Then There Was Silence was released a full 4-5 months before A Night at the Opera, and it’s an unusual single as the title track is 14 minutes long. There is no radio edit here, and since I’m accustomed to the advent of the ‘single’ as a direct vehicle for radio promotion, I’m at a loss to think that anyone outside a devout college radio metal program would have aired this. More likely it’s a well planned teaser for fans, giving them 17 minutes of new material far in advance of the full-length. Was Blind Guardian’s ode to the fall of Troy a great idea to get the blood running in the band’s legions of fans? More or less. Like any track pushing such a huge length, it requires a lot of patience to digest, and not all of the 14 minutes here glint with brilliant steel or fresh ideas. But if you enjoyed the Germans Queen-influenced operatic power metal on the past two albums, surely there are moments of satisfaction, like when the band finally builds to the glorious chorus, the drums rolling along to a march beat and the multi-tracked vocals soaring. Ideally there are 3-4 minutes of fat here that could have been trimmed off without the song losing any emotional impact, but then you’d be left less time to get involved. Also included on the single is the English version of “Harvest of Sorrow”, a gentle ballad with flute and synthesizer that recalls “The Bard’s Song” or “A Past and Future Secret”. The track is fairly catchy (a leftover from the previous album), and was released in different languages for separate regions, an obvious bone cast to the band’s rabid international following. It’s a pleasant ballad, almost as smooth as “A Past and Future Secret”, but I can see why they’d (initially) reserve it for this single and not the core album. As a preview placed well in front of A Night at the Opera, this was actually not bad for tiding the fans over until they could get their claws around the full-length. I know I bought it. Looking back though, there is simply little reason to purchase it. “And Then There Was Silence” is on the album, and there are multiple versions of “Harvest of Sorrow” available as bonus tracks, depending on which pressing you own. Assuming you don’t, then that would be the sole reason to pursue this release.

Track listing:
1. And Then There Was Silence
2. Harvest Of Sorrow