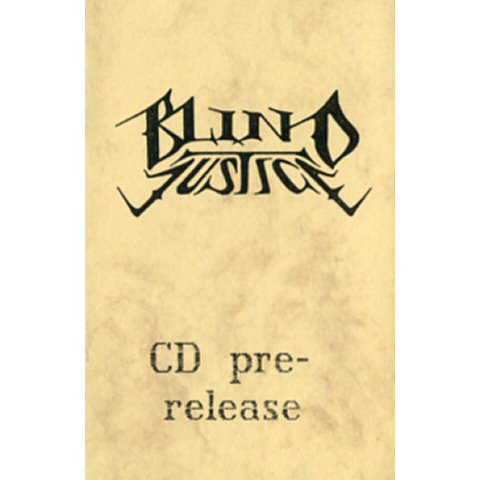 Blind Justice is a progressive heavy metal/ thrash band from Rotterdam, Holland (Netherlands). Founded in 1989 and the band signed to Roxon Records for their debut album Sax And Violins. Prior to the release of the debut album in 1993 the band had this 4-track cassette sent out to get gigs and reviews. This has some gruff semi-shouty death metal vocals for one thing, and on the music front the sax and the violin(s) come accompanied by choppy, quasi-mechanical semi-technical thrash that would remind of Metallica’s “…And Justice for All”, Heathen’s “Victims of Deception”, and above all Meshuggah’s mercurial debut “Contradictions Collapse”. The saxophone is not featured very prominently, as a matter of fact, but that comes for the sake of the violin which gives a nice surreal touch to the proceedings, think its ephemeral unobtrusive application on the My Dying Bride opuses rather than its more insistent omnipresence practiced by Skyclad. A shredder like Relief will make the head bang in stiff appreciation, but expect a few genuinely captivating twists and turns as well among the heavy crushing riff-patterns receiving healthy support from the violin on the similarly-styled, but more melodic “Suffer”. The Thin Lizzy cover is also surprisingly cool. So instead of Sex And Violence we got Sax And Violins and in a matter of fact its quite and interesting and unique release.