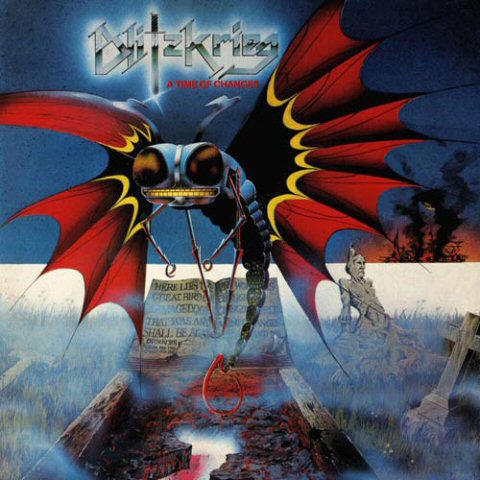 Blitzkrieg -A Time Of Changes lp/10″

2021 re-issue with audio restoration and mastering of the original transfer with their debut EP pressed as a separate 10” as bonus. Black vinyl with insert and poster. Limited 350 copies

A Time Of Changes, must be one of the most classic and best albums to have come out of the NWOBHM moment, right up there with Saxon, Angel Witch, Iron Maiden and Diamond Head. Blitzkrieg who came into existence in 1980. Although their debut single (on Neat records) was released in 1981, Buried Alive v/s Blitzkrieg it was not till 1985 that the band recorded their debut album as vocalist Brian Ross was involved with his other band, Satan recording and touring their debut opus Court In The Act. All the classic tracks are here on this album including many still played live today like the Metallica covered Blitzkrieg track. Armageddon, Inferno, Vikings, Saviour and the amazing title track, i can name them all as the album is nothing but a masterpiece that should go down in the history books