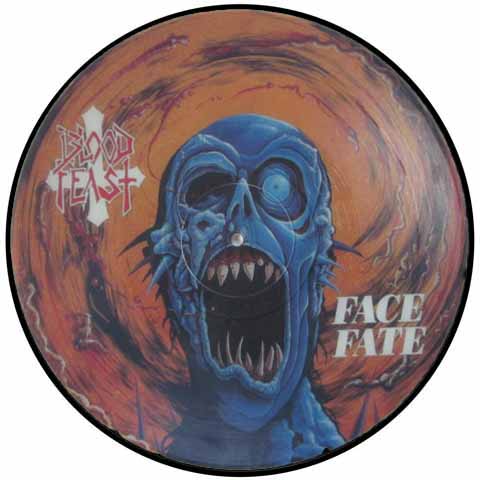 Face Fate offers up one original, one demo retest, and two slightly refurbished tracks from the debut. To me, it always seemed more a showcase of Waterfront Studios new mixing board or something cause the only thing different I can find in R.I.P. and Vampire is an upgrade in production that’s still hairy and napped while slicing off a layer of distortion. The title cut was probably meant to be their most intense and ornery moment outside of Kill For Pleasure’s hostile domain that comes off a smidgen forced while remaining baleful with Gary Markovitch’s flayed vocals at times burrowing into deeper, more scornful tracts of lungland. Demo retake Blood Lust rakes across more vilified pastures than the original; not very difficult considering re-recording it in a shoebox probably would’ve been a promotion in values. And it goes by just about that fast. Basically, Face Fate offered two things: a fine, inexpensive introduction to Blood Feast or one, possibly two tracks new to the ears to those who may have grabbed and liked the debut. As well, New Renaissance house artist Drew Elliot earned another paycheck.