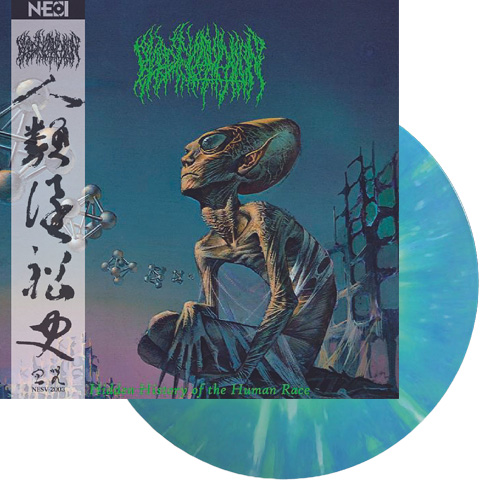 With Hidden History Of The Human Race, Denver, Colorado’s cosmic death metallers Blood Incantation present the successor to one of the most talked about death metal debuts in recent years, 2016’s Starspawn. A cerebral whirlwind of intense and otherworldly atmospheric death metal, Starspawn took the underground Death Metal world by storm and is about to be topped by the quartet’s second offering. From the neck-breaking speed, slams, and sheer aggression of Slave Species of the Gods to the album’s 18 minutes long final track Awakening From the Dream of Existence to the Multidimensional Nature of Our Reality (Mirror of the Soul), Blood Incantation have excelled themselves at crafting a dynamic foray into the realms of progressive, brutal and strangely melodic death metal, all recorded analogue at World Famous Studios. Accompanied by stunning art by sci-fi legend Bruce Pennington, HHofHR is the manifest of a band destined to top many year’s end best of lists.

Track list:
1. Slave Species Of The Gods
2. The Giza Power Plant
3. Inner Paths (To Outer Space)
4. Awakening From The Dream Of Existence To The Multidimensional Nature Of Our Reality (Mirror Of The Soul)