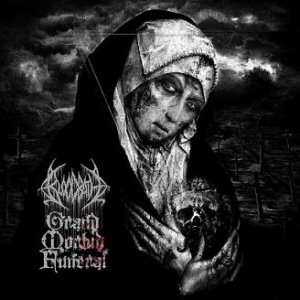 Bloodbath is a titan of death metal from Stockholm, Sweden, notable for the inclusion of Katatonia ,Opeth and now Paradise Lost members. Following the departure of Opeths Mikael Akerfeldt and months of speculation and rumour, Nick Holmes was announced as the new vocalist of Bloodbath in September of 2014. Recorded once again at Ghost Ward Studios and the City of Glass Studios in Stockholm, and mixed by David Castillo, Grand Morbid Funeral, Bloodbath’s fourth full-length studio release, is undoubtedly the bands darkest and dirtiest opus yet; an organic collection of filth-ridden tracks straight from the grave, boldly eschewing the approach of somewhat over-produced modern death metal in favour of something altogether more rotten to the bone. With eerie doom-like melodies mixed with raw and savage riffing, and featuring a number of guest appearances including Chris Reifert and Eric Cutler from US gore-masters Autopsy, Grand Morbid Funeral is a new high-point of brutality for Bloodbath.