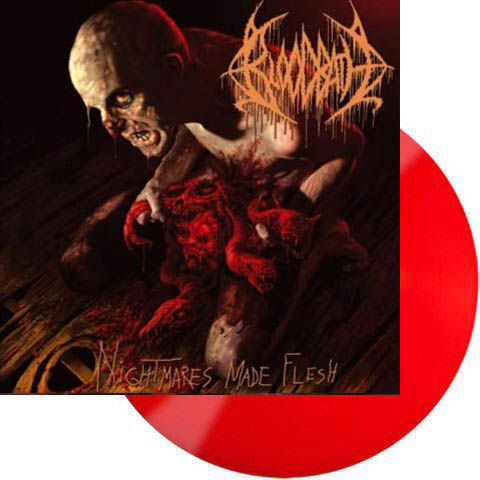 Swedish death metal supergroup Bloodbath arrive at their third release, 2004’s Nightmares Made Flesh, having both reshuffled (drummer, now guitarist Dan Swanö making way for Satanic Slaughter/Witchery man Martin Axenrot) and exchanged (Opeth vocalist Mikael Åkerfeldt for top producer and multi-band member Peter Tägtgren) some of its all-star team — the result of understandable constraints of time and other-band responsibilities. Not that this is a problem, mind you, since Bloodbath’s raison d’être remains essentially the same: to provide an informal venting place for these musicians’ most primal, death/black metal aggressions, as typified most of their early career projects, but which have generally become less integral to their more recent and, shall we say, more refined extreme metal pursuits. And, if anything, this latest Bloodbath configuration has managed to come up with an album that’s all the more ferocious and overpowering in nature than its predecessor, if that’s possible. Without disrespecting Swanö’s multi-instrumental talents, it’s often Axenrot’s remarkable skills giving new offerings like “Feeding the Undead,” “Bastard Son of God,” “Stillborn Saviour,” and the sudden-stopping complexity of “Cancer of the Soul,” newfound muscle; and Swanö’s ability to now focus on his guitar contributions alongside those of Katatonia men Anders Nyström and Jonas Renkse, arguably results in an even more enviable embarrassment of guitar-riff riches than achieved on prior works. Specifically, the instantly memorable and downright wicked-sounding passages distinguishing the likes of “Brave New Hell,” “Outnumbering the Day,” “Year of the Cadaver Race,” and “Draped in Disease,” show the kind of raw compositional prowess that virtually every other death metal band on the planet would simply kill to possess. Tägtgren’s ragged-throated contributions are also perfectly suited for the hateful diatribes contained here (notably, he did not produce this album), which, as suggested by the above titles, also take great pleasure in exploiting the musicians’ collectively satanic lyrical interests past. Really, one could go on and on (did we mention the death/doom glory of “The Ascension”?), but suffice to say that Bloodbath’s astounding convergence of individual talents — not to mention these talents’ unusually unselfish contributions to the whole — do the oft-unwelcome “supergroup” tag more justice than we have grown accustomed to.