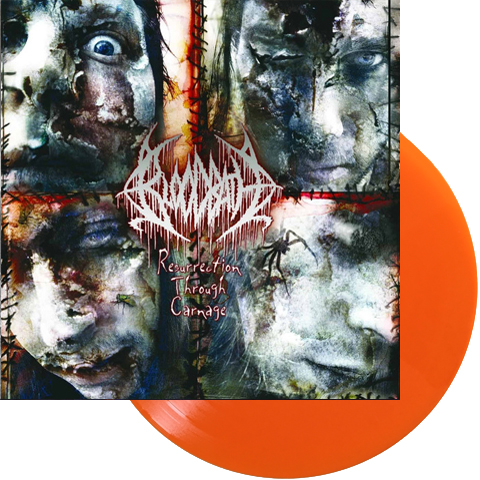 Resurrection Through Carnage is the first full-length by this Swedish old-school death metal side project. This quartet’s all-star lineup consists of Mikael Akerfeldt (Opeth) on vocals, Anders Nyström (aka Blackheim) (Katatonia, Diabolical Masquerade) on guitars, Jonas Renkse (also of Katatonia) on bass, and Dan Swano (Edge of Sanity, Karaboudjan, Nightingale) on drums. This group exists largely to pay homage to the old Swedish death metal greats (such as Entombed and Dismember), but it is also clearly a way for these musicians to have some fun and blow off some steam from their more serious “day jobs.” Still, what immediately stands out about this album, especially considering the tongue-in-cheek press surrounding this release, is just how serious these guys are about playing this music, and how intense and heavy these performances are. It’s actually surprising, considering how mellow and nuanced the recent work of Opeth, Katatonia, and Nightingale have often been. Throughout the album, the succession of well-placed riffs, melodic breakdowns, and blastbeats proves again and again that not only are the musicians students of the genre, but that this music is seemingly in their blood (no gore puns intended). The only non-authentic part of this album, and its main drawback, is the recording quality, which is cleaner and more digital-sounding than any of the old-school albums being paid homage to. On the other hand, at least the band saw fit to replicate the dirty, skuzzy guitar tone of the old Sunlight Studios/Tomas Skogsberg productions. All in all, this is a fun and suitably nasty album that should satisfy fans of this style, and possibly surprise fans of these musicians’ other recent efforts.