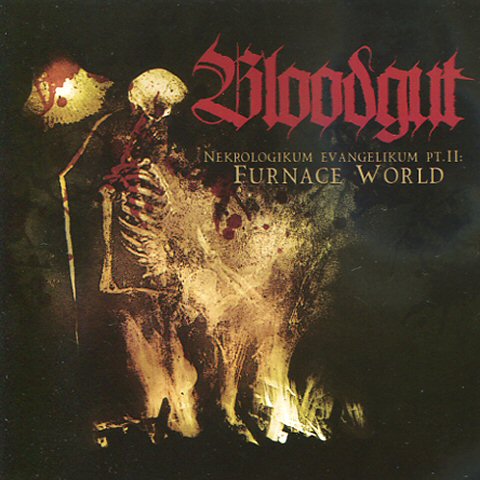 Mister Rogga Johansson and drummer Matthias ‘Matte’ Fiebig (Blodsrit, Paganizer) has released their second album with Bloodgut, entiteld “Nekrologikum Evangelikum Pt.II: Furnace World”. This is the follow up to the 2010 released debut “Nekrologikum Evangelikum Pt. I: Zombie Reign 2666 A.D.”. There are some surprises on thsi one, check out ‘No Vacancy At Zombie Inn’, its the slowest track on the album and it features some melancholic female vocals which makes the track very dark and atmospheric. This track wasn’t something i expected from anything bearing Rogga’s name but its a beauty. The rest is mostly brutal death metal with rugged Rogga riffs (try to say that fast ten times in a row) but there are some more experiments. ‘Slothful Crawl Of The Undead’ has a successful outcome and is more Rock than Grind, reminding of Pungent Stench here and there. The last track ‘Furnace World (Nekrotikum Evangelikum Pt.II)’ is a weird instrumental progressive tune and after that comes an hidden bonus track that starts with Swedish comedian Mikael Svullo Dubois then goes into a house track. The booklet then mentions 8 more bonus tracks but these arent on the album its a printing error on the booklet. “Nekrologikum Evangelikum Pt.II – Furnace World” offers more than you’d expect at first and (despite a few exceptions at the end) it’s a pleasing and almost versatile record. It keeps fascinating after many spins and it’s a shame this project ended after this album. This asks for more!

Track list:
1. Countdown To Obliteration (3 2 1: Mushroomcloud)
2. Blasted Into Nothingless
3. They March Below The Oceans
4. Forcefed Foul Flesh
5. Inquisitor Deluxe Pt.II
6. No Vacancy At Zombie Inn
7. A Need To Feed (On The Masses)
8. Arrival At The Last Human Outpost
9. Slothful Crawl Of The Undead
10. Furnace World (Nekrotikum Evangelikum Pt.II)
11. Untitled