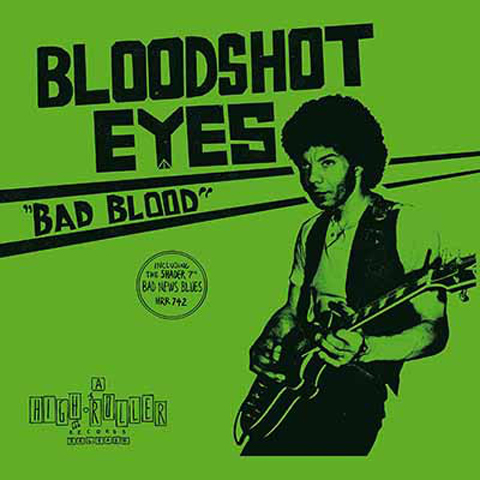 Time tells no lies, Praying Mantis famously once said, but it certainly dims the memory. Shader’s George Witter and Bloodshot Eyes’ William Hayter piece together the conjoined history of the two bands. Known for just one single, 1981’s Bad News Blues, Shader were a hard-working London-based band, fronted by the charismatic George Witter, who paid their dues and had what it took, but just never got lucky. Their story begins when the teenage George arrived in the UK to join his parents. “I’m a Caribbean guy,” he begins. “I came here in ’67 to join my parents. I was 16 at the time and I was used to listening to reggae back home, well, it was more ska then. I got off the plane, and it was freezing cold,” he laughs. “I thought, ‘my God, I didn’t realise there was snow!’ Anyway, I started hearing some of the British pop music at the time which was bands like The Who, The Stones, The Move, and that was really groovy. I really was intrigued by that kind of stuff. And then, by the end of the summer I heard Jimi Hendrix, saw him on TV and thought ‘Oh, black man on TV’. That’s what went through my head. ‘I want to do that.’ Shader was formed in the summer of 1976. I met Richard Wright and he had a mate called Terry Goillau who wanted to play bass, but we didn’t have a drummer. We always had a problem finding drummers. There was a band around Walthamstow called Sam Apple Pie – Sam Sampson’s band –and they had a few records out and I remember going to a gig down in Walthamstow, seeing the band and then winding up meeting his brother who was about my age at the time, in his early twenties or so, and his name was Doug Sampson. He played with us and, guess what, he ended up playing in an early version of Iron Maiden. Shader used to play Ruskin Arms Thursday nights – we never made it to the Friday or Saturday! And the music we were doing wasn’t heavy-heavy… It was sort of rock, progressive rock as well, and blues rock. We weren’t really out-and-out heavy. I didn’t want to do that type of thing because everybody else seemed to be doing it. In the spring of 1978 Shader decided to issue a self-financed 7”. Bad News Blues appeared in 1981 on their own Piston Broke Records. We called the label Piston Broke, we had an image of a piston and it was broken, but we were always pissed and broke. That was the joke. A further years downt he road the band fell apart but George Whitter was still full of ideas: all he needed was a band to get them down on tape. And that band was Bloodshot Eyes even thought the first demo (released in 1982 went under the name of Bad Blood). Bloodshot Eyes did a few studio sessions but their career as a NWOBHM act would however become short lived and the band split up in 1986. The Bad Blood album features the Shader single as well as material written and recorded in 1983 and 1985.