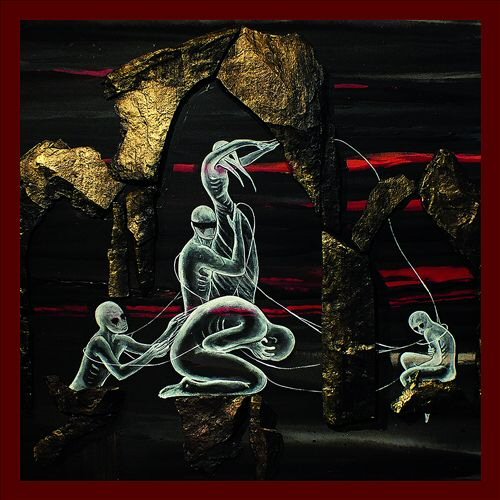 This split pairs two French bands who originally came from the extreme metal scene and have each evolved into distinct experimentalist entities that have no peers among their home country’s fertile underground scene. Except, perhaps, for one another. While Blut Aus Nord emerged from occult black metal to become something wholly other, the P.H.O.B.O.S. power drone unit have transformed their sound over time, with more dynamics and distinct, implied musicality and spaciousness. Triunity may not establish a musical link between them — they remain as different from one another as they are from other acts — but it does create an aesthetic one, almost as if each artist worked toward the other while retaining an individual identity. This is avant-garde music, harsh, aggressive, menacing, full of almost impenetrable darkness. This is a rare case where a split not only makes sense, but works on all levels. BAN’s side contains elements from many of their other releases, but also something new: live drums instead of machines courtesy of Gionata Thorns Potenti, whose international résumé is not only vast, but daunting. Check De Librio Arbitrio. They hammer right at Vindsvals gnarly leads and bludgeoning riffs (think Memoria Vetusta II), rolling, filling, charging, and cracking. His vocals are somewhat subsumed by the massive instrumental mix — sometimes whispered and sometimes backmasked — it doesn’t matter, this cut burns. Hubris establishes a groove and locks on. It stays there even as atmospherics and electronics slip in and away from the guitars and drums. The three tracks by Frederic Sacris P.H.O.B.O.S. (all of which are seven minutes — exactly 777 — get it?) use percussion with the precision of a high-output drill press, with squalling guitars and ornery basslines. Ahrimanic Impulse Victory is “musical” in that its samples and instruments all wrap around its rhythm track, and the snarling vocal spreads its dread evenly. Transfixed at Golgotha contains a musicality more expressionistic than actual, its dedication of purpose is exacting and relentless. When taken together, the six tracks on Triunity create a terrible oneiric, occult-ish beauty that is so black it shines.