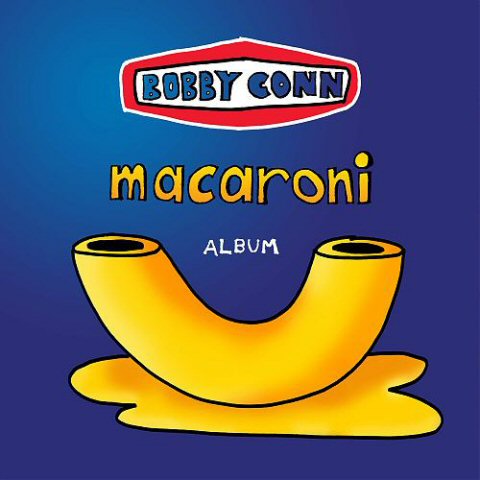 Longtime Chicago showman Bobby Conn has always held theatrics in as high a regard (if not higher) than musicianship. Whether claiming himself the anti-Christ, propagating the ridiculously convoluted “Continuous Ca$h Flow System,” or lampooning George Bush and Tom Cruise with equal vigor, Conn has relied on high concept, fabrication, and over-the-top absurdity since his beginnings. With his sixth studio album Macaroni, Conn revisits some of the social commentary of his Bush administration-era album The Homeland, this time addressing the Occupy Wallstreet movement while at the same time offering a scathing critique of many of its hipster minions’ lifestyles. From the Marc Bolan falsettos of the album-opening title track, Conn volleys between glam, funk, and slight electro flourishes as the foundations for his lyrical rants. On pseudo-protest songs like “Govt,” “Greeed,” or “Can’t Stop the War,” it’s hard to tell how meta the message is. They seem more like actual condemnations of the U.S. government and the spiritual bankruptcy of modern times than tongue-in-cheek novelty songs, but is it possible Conn is just making fun of people who make protest songs by writing some himself? With a history of falsehood as deep as his, he runs the risk of being the boy who cried “Concept!” when trying to make any kind of serious statement. Apart from this confusing aspect, the album is surprisingly cohesive. Macaroni seems to weigh heavier on the side of musical focus than his previous work. The snaky Afro-beat trappings of “The Truth” seem concerned with laying down a groove and little else, and the production throughout is clear and crackling. Members of Chicago loft scene bands like the Detholz! and Mahjongg make up Conn’s powerful and spot-on backing band the Burglars, creating a sound richer than on any of his earlier records. Even in such brilliant full color, Bobby Conn remains an acquired taste. His songs are the aural equivalents of when a creepy stare from a stranger on the bus gets to be a bit much, even when he’s on a comical diatribe about organic produce or “all the kids today typing on their phones.” Macaroni is classic Bobby Conn, and much like its crudely drawn cover depicting an appropriation of the classic blue and orange Kraft Mac n’ Cheese box, those who like it will love it, and those who don’t will likely pay it no mind.