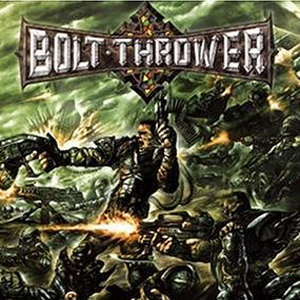 The war ravaged battalions of the Death crusade strike hard with yet another round and another, and another of aggressive metallic firepower on their latest “Honour, Valour, Pride” release, the follow up to 99’s “The Mercenary,” and sixth overall. Similar in scope to stepping on a land mine, or Australia’s Extreme Metal kings Damaged, same difference really, Bolt Thrower’s a name that’s heralded with age old “true” Metal tradition strewn with sludge, speed, and shell shock. A bloody reunion between Manowar, Morbid Angel, and The English Dogs — Forward Into Battle indeed — in full combat mode, “Honour – Valour – Pride” is prepared to deal another death blow into the heart of complacency while adding a new chapter to their durable yet unheralded history. Bolt Thrower’s tradition of Grind-it-out attitude put to ferocious riffs, double-bass blasts, and war-torn lyricism has haunted listeners for over a decade now and never have they ever backed off their belief-to produce skull-crushing death dirges with honourable intent and optimum volume. The nine songs here, all methodical in their approach, often satisfy themselves by way of a torturous slow kill fused with heart-stopping quick strikes of thrashed-up rage. While a song like “Inside The Wire” or “Suspect Hostile” often convey an in the mud monotony, often enough the desirable outcome is revealed-“Contact – Wait Out,” “Honour,” “The Offensive” should you manage to survive the initial offensive. Potent riff lines merge with eerie tonality and death grunts (fare thee well Karl Willets, hail new vocalist Dave Ingram formerly of Benediction) in a consuming campaign of epic proportions fitting in their usual drudgery fed on nightmares of napalm. As always, a Bolt Thrower album is an exercise in duress put to perilous first person perspective from behind enemy lines where your only defence is your strength of will and belief in God and it won’t take long before they’re drained from you.