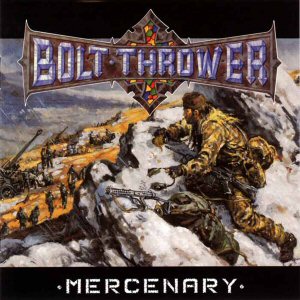 Re-issue on black vinyl with gatefold cover and poster.

Mercenary is the first Bolt Thrower release to feature significant changes for the group. The music isn’t anything new, but the English grindcore outfit had an updated lineup that included longtime members Barry Thompson and Gavin Ward on guitar, Jo Bench on bass, vocalist Karl Willets, and rookie Alex Thomas on drums. Additionally, Mercenary is the first recording from the band to appear on Metal Blade Records. These changes have little affect on Bolt Thrower’s sound. The career-long pattern of ever-tightening performances is upheld, as all involved do a splendid job reproducing the band’s trademark racket. Thomas’ superior drumming is more impressive than his predecessor’s; however, some would argue that Andy Whale’s borderline sloppiness amounted to a sonic signature, so it’s wash. Despite being more technically accomplished, Mercenary lacks the material to qualify as a significant Bolt Thrower disc. Fans of the metal act will approve of this 1998 offering, but new listeners might want to check out For Victory or The IVth Crusade before soldiering on to Mercenary.